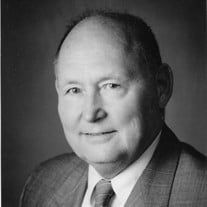 Alex Richardson, a retired engineer, passed away peacefully at his home in Lancaster, Pennsylvania on September 13th, 2021, aged 93. Born in Michigan to Margaret and Avery Richardson, he graduated from Boonton (NJ) High School, earned a BEE and MME in Electrical Engineering from Cornell University, and an MS in Engineering from Stevens Institute of Technology. He served as an officer in the Army Signal Corps and was deployed to Korea. After a long career with ITT Avionics, he had a second career as a Project Engineer for the New Jersey Turnpike, developing the original EZ-Pass system. Alex was a certified Professional Engineer and a Brother of Alpha Chi Rho fraternity. His 65-year marriage to Phyllis K. Richardson began in 1955. They raised their family in Livingston, New Jersey, where they were leaders in the Federated Church of Livingston. Alex served on the Livingston Board of Education for 12 years, including several years as its President, and served in leadership positions of the NJ School Boards Association. He was appointed to the National Advisory Council on Bilingual Education in 1985. A certified Parliamentarian, he provided services to community groups and governing bodies for many years. He was also a Boy Scout troop committee member. In 2010 Alex and Phyllis moved to the Willow Valley community near Lancaster, where he continued to be active in the community. They both enjoyed travel to Europe and other overseas locations. Alex enjoyed the outdoors and hiking, camping, and canoeing with his family, as well as woodworking and building furniture. To his children he passed on his enthusiasms for creative cooking and baking, foreign languages, history, and both classical and folk music. Alex is survived by his three children, Donald (Ramona), Dorna, and Kristen; two grandchildren, James (Christina) Richardson and Sarah (Edward) Hackman; and two great-grandsons, Adam and Ryan Richardson, in whom he took great delight. He also leaves 7 nieces and nephews and their families. In addition to his wife and parents, he was predeceased by his brother and sister-in-law, Stephen and Dorette Richardson, and sister and brother-in-law, Laura and John Gilbert. Interment will be private at a later date. In lieu of flowers, Alex would have appreciated donations to Heifer International, a food security organization he supported that works to eliminate hunger worldwide.

Alex Richardson, a retired engineer, passed away peacefully at his home in Lancaster, Pennsylvania on September 13th, 2021, aged 93. Born in Michigan to Margaret and Avery Richardson, he graduated from Boonton (NJ) High School, earned a BEE... View Obituary & Service Information

The family of Alexander L. Richardson created this Life Tributes page to make it easy to share your memories.

Alex Richardson, a retired engineer, passed away peacefully at...

Send flowers to the Richardson family.