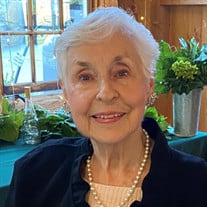 Alice Ann Robertson Colton, a faithful Christian and devotee of family and friends, passed away on March 3, 2021, at Hospice & Community Care in Mount Joy, Pennsylvania. She was the oldest daughter of the late Harriett B. and Thurman C. Lindsey of Hagerstown, Maryland and was the loving wife of the late James A. “Jim” Robertson and, more recently, John M. Colton III. Alice Ann grew up in Hagerstown, Maryland, where she met her first husband, Jim Robertson. The couple had two daughters, Beth and Laura, born in Georgia and Germany, respectively, where Jim was stationed with the US army. Following Jim’s deployment, they settled in Maryland, moving to the Towson area in the 1970s. There, Alice Ann worked as an assistant teacher at St. Paul’s lower school and also began what became her life-long dedication to learning, teaching, and growing in the Christian faith. In the early 1980s, Alice Ann and Jim moved to Franklin, Tennessee, where they lived for nearly 15 years. They loved the area, and Alice Ann’s spiritual connections continued to flourish as she and Jim helped found the Episcopal Church of the Resurrection in Franklin. Alice Ann also founded a Christian ministry supporting new mothers in the community and trained as a Spiritual Director. After Jim retired from banking, the couple moved back to the Baltimore area to be closer to their daughter Beth and two grandchildren, Lindsey and James Kiefer. Within a year of their relocation, Jim passed away unexpectedly. Alice Ann dedicated her time following his death to supporting her family and friends and was instrumental in founding the Church of the Resurrection, located in Lutherville, MD. She served on the vestry and assembled a prayer team that now has more than 80 members. In 2010, Alice Ann remarried a Hagerstown childhood acquaintance, John Colton. Alice Ann and John later settled at Willow Valley Communities in the Lancaster area, a fantastic place for them both within which they had an immediate community of friends, culture, and support. Her sister, Barbara Lindsey, also moved to the community a few years later. Alice Ann was an excellent cook and entertainer. She loved art, gardening, reading, and most of all, she loved her family, friends, and the Lord. She lived a life of selfless service to others and enriched many lives. Alice Ann is survived by her husband John, her daughters Beth and Laura Robertson, two grandchildren Lindsey Kiefer Koeckert and Dr. James Kiefer, sister Barbara Lindsey, and Barbara’s two children Hannah and Sam Borgeson. Also surviving Alice Ann and close to her heart are John’s daughters, Joan Colton Fink and Beth Colton, and grandsons, Vernon “Colton” Colton and Dean Colton. We will all miss our mother, wife, grandmother, stepmother, aunt, sister, and friend. In lieu of flowers, a donation to the hospice that took such sensitive and skilled care of her in her time of need would be much appreciated: https://www.hospiceconnect.org/memorial. Memorial services will be held in Lutherville, MD at the Church of the Resurrection on April 23, 2021 at 2 p.m. and also on April 27, 2021 at 2 p.m. at Ascension Lutheran Church in Willow Street, PA.

Alice Ann Robertson Colton, a faithful Christian and devotee of family and friends, passed away on March 3, 2021, at Hospice & Community Care in Mount Joy, Pennsylvania. She was the oldest daughter of the late Harriett B. and Thurman C. Lindsey... View Obituary & Service Information

The family of Alice Ann Robertson Colton created this Life Tributes page to make it easy to share your memories.