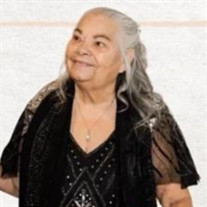 Amparo Roman, 87, of Lancaster, PA, formerly of Las Piedras, Puerto Rico entered the Golden Gates on Tuesday, December 7, 2021, peacefully surrounded by loved ones at home. Amparo was born in Las Piedras, Puerto Rico on October 30, 1934, to Avelino Lozano and Sotera Ruiz. Amparo was the mother to Edwin (Emmy), Maggie (Angel), Norma, Destiny and Sarai as well as many others she cared for. She raised her children with love and devotion in Lancaster, PA. Amparo, who loved to be called “Wela” by her family was a God-fearing woman. She was a pioneer for her family and community. She lived a full life filled with love and many accomplishments. Amparo and her late husband, Ramon Roman, transitioned to Lancaster, PA in the late 50s after being married in New York, NY. Her parents and siblings followed her to Lancaster, PA shortly after. Amparo and her husband established the first Spanish grocery store and first Spanish restaurant here in Lancaster. She was the first Spanish Nutritionist for the Community Action Program. Additionally, they had the privilege of pastoring two churches in Puerto Rico. After the passing of her late husband in 1992, she dedicated her life to serving the Lord and being the matriarch to her family. She was an active member of First Spanish Assembly of God for many years as an Honorary Deacon. In 2016, Amparo became the Founding Executive Member of Agape FCC where she had great admiration for her Pastors Luis and Anayancy Figueroa who faithfully visited her weekly during her last days. Amparo is survived by her five children, two brothers, two sisters, nine grandchildren, nine great-grandchildren, and one great-great-grandchild. Proceeded in death by two children, three sisters and three brothers. Viewing will be held on Sunday, December 12, 2021, from 5:00 p.m. to 7:00 p.m. at Groff Funeral Home, 528 West Orange Street, Lancaster, PA 17603. A Funeral Service will be held on Monday, December 13, 2021, at 11:00 a.m. at Agape FCC, 1204 Wabank Road, Lancaster, PA 17603. Friends may greet the family at church on Monday morning starting at 10:00 a.m. Burial will follow at Millersville Mennonite Cemetery 435 Manor Avenue, Millersville, PA 17551. Monetary memorial contributions may be made in her honor to Agape FCC Church, 1204 Wabank Road, Lancaster, PA 17603.

The family of Amparo Roman created this Life Tributes page to make it easy to share your memories.

Send flowers to the Roman family.