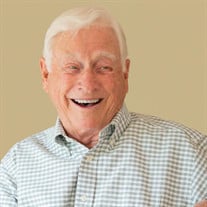 Andreas “Andy” Aastad departed this life peacefully on Friday, February 25, 2022, surrounded by his loving family, just two weeks shy of his 100th birthday. Andy was born in Bamble, Norway, in 1922. He arrived at Ellis Island with his mother, Alma, in 1926, when he was four years old to join his dad, Peder Johan Aastad. The Aastad family settled in Delaware City, Delaware where Andy was an All-State Football player on the Delaware City high school team. At the onset of WWII, Andy joined the U.S. Navy with the dream of becoming a Naval Officer, which he accomplished. After the war ended, he completed his education at the University of Delaware, graduating in 1949. He played on the Freshman football team and was a member of the Sigma Phi Epsilon fraternity, all the while continuing his patriotic duties in the Naval Reserve. He was recalled during the Korean conflict in the 1950s, where fixed-wing aircraft were left behind in favor of the nascent helicopter. While serving in the Naval Reserve in 1954, he was assigned to a mission in the Arctic on the USCG Eastwind Icebreaker. He was selected as the helicopter pilot for a Disney movie, “Men Against the Arctic,” which won an Academy Award. An invitation followed to come to Disney Studios in California where he met Walt Disney and saw the final version of the short film. In 1962, Andy began the career he loved with Bell Helicopter Company. He worked for several helicopter manufacturers, ending his successful career at Messerschmitt, Boelkow, Blohm (MBB) in West Chester, PA as Senior Vice President of Marketing and Customer Service in 1991. Andy was instrumental in introducing two MBB helicopters, the BO-105 and the BK-117 for use in the air medical industry. He launched an intensive marketing campaign with outstanding success. Andy continued to contribute to the helicopter industry for the next ten years with the formation of the Aastad Company, where he published a monthly helicopter marketing newsletter and wrote numerous articles for Rotor Magazine. He is survived by his beloved wife of 33 years, Carol Davis Aastad, and three children, Amy Armstrong (Dicky) of Wilmington, DE, Peter Aastad of Wilmington, DE and Erik Aastad of Falls Church, VA, and grandson, Kyle Armstrong, of Baltimore, MD. He is also survived by his stepsister, Ethel-Anne Roome (Ian) and their daughter, Olivia Bittner (Tyler), and stepchildren, Scott Harlan (Mimi), John Harlan, and step-grandchildren, Kirsti and Davis Harlan, and five nieces and nephews. Andy was predeceased by his sister, Margaret Aastad Raine. Andy married Margery Metz in 1947 and they had three children. It wasn't until 1988 that Andy met the true love of his life. He and Carol were married in 1990 and they enjoyed 33 happy years together, traveling and golfing in Scotland, Bermuda and Hawaii. They moved to Willow Valley Communities 14 years ago, which Andy referred to as “Camelot.” Andy was always happy and smiling, with his beautiful blue eyes sparkling. Andy loved reading historical nonfiction, which kept his mind sharp until the very end. He also loved to sing. The day before his passing, he sang a love song to Carol, “Dearly Beloved.” Andy has taken to the skies once again, happily piloting his helicopter. A private memorial service will be held. In lieu of flowers, donations may be made to the American Helicopter Museum, 1220 American Boulevard, West Chester, PA 19380; Willow Valley Communities Charitable Foundation for the Memory Care Center, 100 Willow Valley Lakes Drive, Willow Street, PA 17584; Milagro House, 669 West Chestnut Street, Lancaster, PA 17603.

Andreas &#8220;Andy&#8221; Aastad departed this life peacefully on Friday, February 25, 2022, surrounded by his loving family, just two weeks shy of his 100th birthday. Andy was born in Bamble, Norway, in 1922. He arrived at Ellis Island with... View Obituary & Service Information

The family of Andreas "Andy" Aastad created this Life Tributes page to make it easy to share your memories.

Send flowers to the Aastad family.