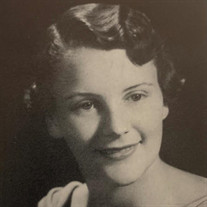 Ann Jaenicke McCall, 90, formerly of Lancaster, PA, passed away on Tuesday, February 8, 2022, at The Village at Penn State, State College, PA. Born in Philadelphia, PA, she was the daughter of Pierre and Anne D’Invilliers Brosseau. Ann graduated from Chestnut Hill College, Philadelphia, in 1954, and moved to Lancaster in 1960 with her first husband, Henry Jaenicke. Her three children, Richard (now of Andover, MA), Ted (now of State College, PA), and Elizabeth (now of Albuquerque, NM) all grew up in Lancaster. Ann later married Vincent McCall, with whom she shared 10 happy years before he passed away in 2003. She moved to State College, PA, in 2007. One of Ann’s biggest passions during her 40 years in Lancaster was the League of Women Voters. For many years, she served as a member of the Board of Directors, particularly in the field of Voter Services. She was the President of the Lancaster League and was also a member of the Board of the League of Women Voters of Pennsylvania. She was active with the Arthritis Foundation from 1971-1979 and volunteered with the American Red Cross. She was a member of Sacred Heart and St. Anne’s Catholic Churches in Lancaster, St. Peter’s Catholic Church in Columbia, PA, and Our Lady of Victory Church in State College. Ann enjoyed traveling, baking, and gardening, and was an avid reader of mystery novels. She loved watching the Kentucky Derby, the ballet and opera, and almost all PBS shows, especially Downton Abbey. She was the best mom and grandmother you could ever hope to have, ever generous with her unconditional love, affection, and support. She will be missed by her three children and four grandchildren (Alexa, Tucker, Eli, and Maggie Jaenicke), her sister and brother-in-law, Elizabeth and William Meyer of Charlestown, RI, and her many nieces and nephews. She was preceded in death by her brothers, Ned and Pierre Brosseau. Her family is holding a funeral mass for her immediate family at Our Lady of Victory Church in State College, PA, and will lay her to rest at Holy Sepulchre Cemetery, in Philadelphia, PA, where her parents and brother are buried. In lieu of flowers, memorial contributions may be sent to the Arthritis Foundation (https://www.arthritis.org/donate) or the League of Women Voters of Lancaster, PA (https://www.lwv.org/about-us/ways-give).

Ann Jaenicke McCall, 90, formerly of Lancaster, PA, passed away on Tuesday, February 8, 2022, at The Village at Penn State, State College, PA. Born in Philadelphia, PA, she was the daughter of Pierre and Anne D&#8217;Invilliers Brosseau. Ann... View Obituary & Service Information

The family of Ann Jaenicke McCall created this Life Tributes page to make it easy to share your memories.

Send flowers to the McCall family.