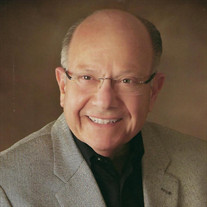 Arthur (Art) Welkowitz, 85, of Lancaster, passed away, Thursday, October 7, 2021, at the Lancaster Rehabilitation Hospital due to Diabetic complications. He was the loving husband of Rochelle (Rocky) Kitt Welkowitz with whom he celebrated 56 years of marriage. A private graveside service was conducted by Rabbi Jack Paskoff on Sunday, October 9, 2021 at Congregation Shaarai Shomayim Cemetery, Lancaster. Arthur was born in Brooklyn, NY on February 24, 1936 to the late William and Sophie Applebaum Welkowitz. He and his brother, Richard, had a wonderful childhood in the New York City area and had the opportunity to attend numerous great sports events of that era and watch their heroes play. While attending Franklin & Marshall College, Arthur became co-owner of County News Agency, a wholesale distributor of magazines, paperbacks, and out-of-town newspapers. Along with his father and brother, he grew the business into one of the leading distributors in the region. He loved working in the business for 34 years and had a great appreciation for all his employees and the work they accomplished. He remained in contact with many of them, periodically meeting for lunch. He cherished his family (including the dogs and horses) and friends and was so very grateful to have them in his life. He loved to laugh, have lunch, and go exploring on a weekend with his adored grandson, Andy, and to spend time at the barn with his dear friend and former trainer Wendell Jones, Sr. and his wife, Lila who became extended family over the years. Arthur is survived by his wife, devoted daughter, Lynda Welkowitz, Lancaster and beloved grandson, Andrew Margolis, Lancaster. The family would like to thank his dedicated helpers over the last years: Almaz, Gezae, Nathan, Dee Dee and Tesfaye. Your loving care and professional skills extended the length of his life and truly enhanced the quality of it. You were, and still are, a blessing. In addition to his parents, he was predeceased by his brother, Richard. Arthur was kind, soft-spoken, generous, and honorable. Arthur Welkowitz was a gentleman. He will be greatly missed by all those who loved and respected him. Contributions in Arthur’s memory may be made to Congregation Shaarai Shomayim, 75 E. James Street, Lancaster, PA 17602 or the Humane League of Lancaster County, 2195 Lincoln Hwy E, Lancaster, PA 17602.

Arthur (Art) Welkowitz, 85, of Lancaster, passed away, Thursday, October 7, 2021, at the Lancaster Rehabilitation Hospital due to Diabetic complications. He was the loving husband of Rochelle (Rocky) Kitt Welkowitz with whom he celebrated 56... View Obituary & Service Information

The family of Arthur (Art) Welkowitz created this Life Tributes page to make it easy to share your memories.

Send flowers to the Welkowitz family.