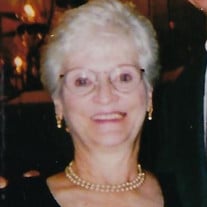 Audrey Paecht McCarty entered this world in the spring of 1934 – and this world has never been the same since. She passed away at Hospice & Community Care of Lancaster County in the early morning hours of Saturday, September 25, 2021 following a short battle with cancer. The daughter of the late William and Violet Paecht, she was born in Newark, New Jersey and graduated from Grover Cleveland High School (Caldwell, NJ) in 1952. That same year, she married William (Bill) McCarty, Sr. and they spent fifty-seven years of happily wedded bliss together before his passing in 2009. Audrey worked in retail sales, most recently at the former Waldenbooks at Park City. She retired in 2003 after more than 20 years of service. Audrey loved her children, grandchildren and great-grandchildren. She was an avid bingo player and enjoyed winning at Scrabble. (She could be relied upon for a seemingly justifiable reason for losing, but never to the credit of a worthy opponent.) She was a master of acerbic wit but it was softened by her kindness and impish sense of humor. She was a dog lover. Her most recent dog, a miniature labradoodle named Finnegan, known more affectionately by the family as “Cujo,” hated vacuums and enjoyed taking Audrey for fast paced walks and slow jogs through the neighborhood. Audrey is survived by four children: Bill, husband of Liz McCarty, Olney, MD, Kimberly, wife of Mike Morrison, Greencastle, PA, Christopher, husband of Heather McCarty, Lancaster and Staci, wife of Jeffrey Heiney, Millersville; eight grandchildren – Michael (Ashley) Giuliano, Lancaster, Brian (Allison) McCarty (Ashton, MD), Megan (Allan) Leaman, Ortanna, JD Hess, Lancaster; Julia (Nelson) Abreu (Silver Spring, MD), Erin McCarty (Washington, D.C.), Tyler Heiney and Jackson Heiney, both of Lancaster; and seven great-grandchildren – Everleigh, Charlotte and Lenna McCarty, Jamie and Jones Leaman, and Liam and Nuno Abreu. She was preceded in death by two sisters – Barbara Pavlisko and Elaine Schumack, and a daughter, Kelli Giuliano, wife of Mike Giuliano, Conestoga. A Memorial Service will be held on Saturday, November 6, 2021 at 12 Noon at Grace Church at Willow Valley, 300 Willow Valley Square, Lancaster. A meal will be provided at the church, immediately following the service. Interment will be private and held prior to the service. Contributions in Audrey’s memory can be made to Hospice & Community Care (https://www.hospiceconnect.org/give) or to the Humane League of Lancaster County (https://support.humanepa.org/memorials-honorariums/).

Audrey Paecht McCarty entered this world in the spring of 1934 &#8211; and this world has never been the same since. She passed away at Hospice & Community Care of Lancaster County in the early morning hours of Saturday, September 25, 2021... View Obituary & Service Information

The family of Audrey Paecht McCarty created this Life Tributes page to make it easy to share your memories.

Audrey Paecht McCarty entered this world in the spring of 1934...

Send flowers to the McCarty family.