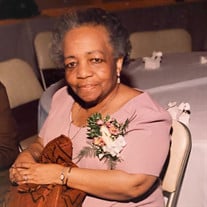 Bernice Wright, affectionately known as Ms. Necie, 88, of Lancaster, gained her wings on Monday, February 28, 2022 at Newport Meadows Nursing Home, Christiana, PA. Born in Pottsville, PA, she was the daughter of the late Isaac and Eloise Johnson Johnson. She was a graduate of Pottsville High School, Class of 1951. She also went on to attend and graduated from Pottsville Secretarial School. Bernice worked as a nutritionist for Penn State Nutrition Services for many years before working for Bulova Tech until her retirement in 1995. After retirement, she worked for the Boys & Girls Club of Lancaster as a receptionist through the Office of Aging 55-Plus program. She was a member of the Red Hat Society and Silver Threads of Bright Side Baptist Church. On the church’s 33rd Anniversary, she was recognized as one of the octogenarians of the church of which she was a lifetime member. Surviving are two daughters, Bonita Boyer (Rene), Carmen Wright-Artis (Willie) and son, Darryl Wright, six grandchildren, eight great-grandchildren and numerous nieces and nephews whom she loved deeply. Her daughter, Patricia Joanne, three brothers: Isaac, James and Robert Johnson, three sisters: Helen Brown, June Dorsey, all of Lancaster and Bessie Ortiz of Pottsville, preceded her in death. Relatives and friends are invited to attend Bernice’s Funeral Service at Bright Side Baptist Church, 515 Hershey Avenue, Lancaster, PA on Tuesday, March 8, 2022 at 12 Noon with Rev. Dr. Louis A. Butcher, Jr. officiating. The family will receive friends from 11:00 a.m. until the time of service. Interment will follow at Mellinger Mennonite Cemetery.

The family of Bernice Wright created this Life Tributes page to make it easy to share your memories.

Send flowers to the Wright family.