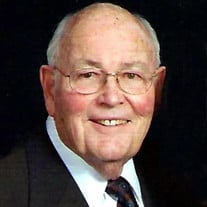 Boyer Lewis Veitch, 89, of Lancaster passed away on Saturday, September 5, 2020 at home where his family came together to share their many happy memories with him and with each other. Born October 20, 1930 to the late Samuel Lewis Veitch and Agnes Bell Veitch in Philadelphia, he delighted in his unique birthdate of 10-20-30. Having graduated from Lower Merion High School he often quipped that he went to school with Kobe Bryant - another Lower Merion alumnus. Boyer graduated from Lafayette College with a degree in psychology and later attended the Wharton School at the University of Pennsylvania studying accounting and finance. He also served in the US Army Counterintelligence Corps after college. Boyer followed his father into the printing business in sales in Philadelphia and in the early 70’s, he purchased a Lancaster printing company which became The Veitch Printing Corporation. He enjoyed many years serving with the Printing Industries of America and the Graphic Arts Association. Boyer was named Small Business Person of the Year of Lancaster County in 1991 and Person of the Year of the Graphic Arts Association in 2001. A man with a winning smile and a generous spirit, Boyer actively engaged in a life of service in Lancaster serving on the boards of what is now The Fulton Theatre, the North Museum and the Lancaster Airport Authority. He developed a special love for The Boys & Girls Club of Lancaster and served as president both for the board of the Club and the Foundation. His strong belief in the values of Lafayette College led to his role as a Trustee and made him a loyal financial supporter for many years. Boyer relished his business connections and friendships over the years. He enjoyed membership at Lancaster Country Club entertaining friends and family and business associates. At the Hamilton Club, he was part of the Wednesday night men’s duck pin bowlers, a member of The Wash Day Club and he served on the Board of Directors. Boyer was a very enthusiastic member of The Lancaster Pirates serving as both “First Mate” and “Chief.” The Rotary Club of Lancaster provided another opportunity to meet people and serve the community. He was a recipient of the Paul Harris Award. His enthusiasm for music covered a wide range. He played several instruments, enjoyed listening to jazz as well as attending the symphony. He would harmonize when singing hymns on Sundays for many years at St. James Episcopal Church—his spiritual home. When he moved to the west side of Lancaster, he found a new home at St. Edward’s Episcopal Church. He and Gin enjoyed traveling frequently, making many trips to Maui, exploring sites in Europe, cruising the Panama Canal as well as exploring cities in China, South Korea and Japan. But most frequently their flights were an opportunity to see family and friends across the country. Boyer is survived by his wife of 22 years, Mary (Gin) Veitch, son, William of Lancaster, daughter, Nancy Veitch Katkin (Larry) of Titusville, Florida, son, Thomas (Kristie) of Cape May, New Jersey, stepsons Ryan Kiehn (Cynthia J. Hoyt) of Reddington Shores, Florida, Dr. Mark Kiehn (Cori Fratelli) of Golden, Colorado, Ross Kiehn (Rebecca) of Dillsburg, and stepdaughter, Sara Kiehn Marinucci (Tony) of Willow Street; grandson, Harry Hansen (Amanda) of Fairbanks, Alaska, granddaughter, Sarah Hansen Ortiz (Alex) of Bellingham, Washington, grandsons, Hunter and Noel Veitch of Cape May, New Jersey and Nathaniel and Sebastian Kiehn of Madison, Wisconsin, Andrew Kiehn of Dillsburg, granddaughters, Sophia Marinucci of Willow Street and Natalie Kiehn of Dillsburg and great-grandson, Logan Ortiz of Bellingham, Washington. Boyer was preceded in death by his first wife, E. Barbara Veitch, and his brother, Donald Veitch (Joyce.) A memorial service is planned for Saturday, October 24, 2020 at 11:00 a.m. to be held in St. Edward’s Episcopal Church, 2453 Harrisburg Pike, Lancaster with family visitation from 10:00 a.m. to 11:00 a.m. Social distancing, masks and COVID restrictions are required for those attending. In lieu of flowers, memorial contributions may be made to The Boys & Girls Club of Lancaster, P.O. Box 104, Lancaster, PA 17608-0104.

Boyer Lewis Veitch, 89, of Lancaster passed away on Saturday, September 5, 2020 at home where his family came together to share their many happy memories with him and with each other. Born October 20, 1930 to the late Samuel Lewis Veitch and... View Obituary & Service Information

The family of Boyer Lewis Veitch created this Life Tributes page to make it easy to share your memories.

Boyer Lewis Veitch, 89, of Lancaster passed away on Saturday,...

Send flowers to the Veitch family.