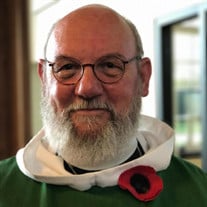 The Reverend Canon Stephen Charles Casey, of Landisville, PA died on Tuesday, January 19, 2021. Born in Hull, England, he was the son of the late James and Hilda Casey of Hull. He is survived by his wife of thirty-seven years, Rayelenn Sparks... View Obituary & Service Information

The family of The Rev. Canon Stephen Charles Casey created this Life Tributes page to make it easy to share your memories.