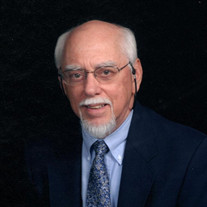 Dr. Charles G. Denlinger of Brethren Village, Manheim Township, passed from this life on December 24th after a valiant fight with cancer. Aged nearly 81 years, he was born in Lancaster on January 1, 1940. He was the loving husband of Gloria Meyers Denlinger, and father of Joseph Austin (wife Canice Crerand) of Westerville, OH and Alison Renee (husband Randall) Kreider of Elizabethtown. He was the grandfather of Nicklaus Isaac and Joshua Nathanial Kreider, and Kathryn Grace and Evelyn Frances Denlinger. He was preceded in death by two grandchildren, Tyler Gregory Kreider and Marian Rose Denlinger. He was the son of lifelong Lancaster County residents, the late Elmer K. Denlinger (1908-1946) and Kathryn A. Good Denlinger Herr Ebersole (1910-1997). He was the brother to Carl R (wife Nancy) Denlinger of Lancaster and uncle to many nieces and nephews. “Chuck” graduated from Hempfield High School (1957), Elizabethtown College (A.B. Math, 1961), the University of Illinois (M.S. Math, 1964) and Michigan State University (Ph.D. Math, 1971). He joined the Mathematics faculty at Millersville University in 1964 and retired from there as Full Professor in 2005. For 11 of those years, he was chairman of the Department of Mathematics. He also served on numerous departmental and university committees over the years. He was co-author of two college-level Calculus textbooks and sole author of an advanced level Real Analysis textbook. He claimed that teaching mathematics to college students was the ideal job. Although he poured himself into preparation for classes and other responsibilities, he often said he never worked a day in his life. Chuck’s interest in music began when he joined various church, school, and community choruses and the trumpet section of the Band at Hempfield High School. In college, he developed a keen interest in classical music, which followed him through the remainder of his life. He and Gloria supported classical music organizations in the area and attended many local concerts including those of the Lancaster Symphony and the Philadelphia Orchestra. Considering that he was largely self-taught, his ability to identify any piece of music in the standard classical repertoire within a few seconds of hearing it was remarkable. Upon moving to Brethren Village in 2014, he donated his collection of several thousand classical CDs to their library. Chuck was active in the Lancaster Church of the Brethren most of his adult life, although he and Gloria were for some ten years members of the Lancaster Religious Society of Friends (Quakers). He served actively on many committees in both, as well as on the Boards of the United Campus Ministry at Millersville University, Alpha and Omega Family Life center, and the Lancaster Interchurch Peace Witness. He loved to lecture on classical music, mathematics, theology, and other topics to church and community groups. After retirement in 2005, Chuck and Gloria spent several exciting years traveling to see as much of the world as their time and budget would allow. They visited the American West, Alaska, Canada, Hawaii, Mexico, Panama, Costa Rica, Peru, Ecuador, England, Scotland, Ireland, Wales, France, Germany, Austria, Switzerland, Norway, Finland, Russia, Hungary, Czech Republic, Slovakia, Croatia, Serbia, Bulgaria, Romania, Greece, Italy, Turkey, China, Botswana, Zambia, Zimbabwe, South Africa, Egypt, Jordan, and Israel. They absolutely loved traveling and meeting the various peoples of the world. In his teenage years, under the tutelage of his stepfather John Herr, Chuck developed the skill of building and working with HO gauge model trains. When he retired to Brethren Village, their Model Train Club welcomed him and applied his skills working on their large layout. A private Life Celebration service will be held at the convenience of the family. In lieu of flowers, contributions may be made to The Dr. Charles G. Denlinger Memorial Mathematics Scholarship established in his memory at Millersville University. Contributions may be made by visiting https://www.millersville.edu/give/make-a-gift.php. To direct gifts to the named scholarship, please select “Other” as the designation and reference the scholarship when prompted. Alternatively, gift checks can be made out to the Millersville University Foundation, and sent to Millersville University, Development Office, P.O. Box 1002, Millersville, PA 17551. Please visit Chuck's Memorial Page at www.TheGroffs.com TribuCast Wednesday 12/30/2020 at 10:30AM at: https://client.tribucast.com/tcid/50549406 Chuck loved Gustav Mahler's Symphony No. 3 in D Minor, Movement 6. Please listen here. https://www.youtube.com/watch?v=iIqoiSPgwUA

Dr. Charles G. Denlinger of Brethren Village, Manheim Township, passed from this life on December 24th after a valiant fight with cancer. Aged nearly 81 years, he was born in Lancaster on January 1, 1940. He was the loving husband of Gloria... View Obituary & Service Information

The family of Dr. Charles G. Denlinger created this Life Tributes page to make it easy to share your memories.

Send flowers to the Denlinger family.