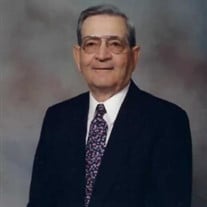 Charles E. “ Sneezy” Heitshu, 100, of Lititz, PA, passed away peacefully at Moravian Manor on Monday, September 13, 2021. For his 100th birthday, he received a commendation from State Representative Steven Mentzer and a drive-by parade by the Lititz VFW. He also received over 100 birthday cards. Born in Lancaster, PA, he was the husband of the late Evelyn S. Dunwoody Heitshu who passed away in April 2018, and the son of the late Charles W. and Maybelle E. Ruth Heitshu. A graduate of J.P. McCaskey High School, Charles proudly served his country with the United States Army during World War II from 1943 – 1946 in Japan, the Philippines, and Europe with the Signal Corp. Of the many stories he has, the one that stands out the most is his pet monkey “Tojo, which he took with him in his travels. He fought in the Battle of the Bulge, a 40-day battle that then British Prime Minister Winston Churchill called “the greatest American battle of the war.” Returning from the war, Charles worked for the former Bell of Pennsylvania for 40 years as a technician and was a member of the Bell Telephone Pioneers. He was a member of the Leola United Methodist Church, enjoyed golf, fishing, and driving on Sundays with Evelyn, visiting the beauty of what Lancaster County has to offer. He is survived by three stepchildren, Sandra A. Martin, Wilmington, DE, Bonnie L., wife of the late Kenneth Steller, Newark, DE, and Gary G. Stauffer, husband of Linda Andrus, Lancaster, PA, three step grandchildren, four step great-grandchildren and one step great-great-grandchild. Relatives and friends are invited to attend Charles’ Graveside Service at Trumbauer Memorial Cemetery, Quarry Road, Leola, PA 17540 on Friday, September 17, 2021 at 12:00 Noon with Pastor Dale Parmer officiating. Full Military Honors will be presented by the Red Rose Veterans Honor Guard. In lieu of flowers, memorial contributions may be sent to Moravian Manor Benevolence Fund, 300 W. Lemon Street, Lititz, PA 17543 or Hospice & Community Care, 685 Good Drive, P.O. Box 4125, Lancaster, PA 17604-4125.

Charles E. &#8220; Sneezy&#8221; Heitshu, 100, of Lititz, PA, passed away peacefully at Moravian Manor on Monday, September 13, 2021. For his 100th birthday, he received a commendation from State Representative Steven Mentzer and a drive-by... View Obituary & Service Information

The family of Charles E. "Sneezy" Heitshu created this Life Tributes page to make it easy to share your memories.

Send flowers to the Heitshu family.