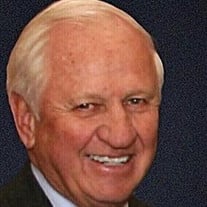 Charles A. Walker Jr., a consummate family man and business and community leader, died on Friday August 7 at Willow Valley. He was 92. Charles – Chuck to his friends – was born in 1927 in Aldrich, AL, to Charles Arthur Walker and Ruth Jones Walker. The family moved to Herrin, IL, where Chuck first met Marjorie Ardis, to whom he would be married for 67 years. After serving in the US Navy, he earned a bachelor’s degree in Accountancy from the University of Illinois. Chuck began his nearly 40 year career with Armstrong World Industries in a cost accounting position in Braintree, MA. His position brought the couple to Oshkosh, WI, where they would become lifelong Green Bay Packers fans. Following the move to Lancaster in 1963, Chuck was named Treasurer and Vice-President of Armstrong in 1974, a position he held until retirement in 1990. At Armstrong, Chuck was a steadfast leader during a period of substantial change, overseeing acquisitions, divestitures, banking relationships, and overall corporate governance. A longtime resident of Lancaster, Chuck was enormously active in the community, serving as Campaign Chairman of the Lancaster County United Way, Vice-Chairman and Treasurer of Leadership Lancaster, Treasurer of the James Buchanan Foundation for the Preservation of Wheatland, a Director of the Lancaster YMCA, the Fulton Opera House, and the Harrisburg Area Community College, and a Trustee of the First Presbyterian Church. He was the 1985 recipient of the Benjamin Rush Award, in recognition of his contributions as a volunteer toward improved health and welfare standards in Lancaster County. For all of his professional and community contributions, Chuck was at his best when surrounded by friends and family. Together, Chuck and Margie were both keen travelers and avid golfers. Chuck shot four holes-in-one (two at the Lancaster Country Club and two in Arizona) and he served as the Board President of the LCC from 1997-98. He was as equally happy on the golf course as he was fishing quietly with his children and grandchildren on Lake Missaukee in Lake City, MI. His long life was certainly full of love and laughs. To know Chuck was to know his relentless commitment to his family – he is survived by his wife, Marjorie Ardis Walker, their two children, Cynthia Ardis Walker and Bradford Charles Walker, three grandchildren, Lysle Ardis Witter, Clayton Walker Witter, and Greta Bradford Witter, and two great grandchildren, Maeve McCrory Witter and Isla Frances Witter. A burial will be at the convenience of the family and a memorial service will be held at a later date. Memorial contributions may be made to local organizations in Chuck’s name – LancasterHistory (230 N. President Ave, Lancaster, PA), Lancaster Conservancy (117 S. West End Ave, Lancaster, PA), or a charity of your choosing.

Charles A. Walker Jr., a consummate family man and business and community leader, died on Friday August 7 at Willow Valley. He was 92. Charles &#8211; Chuck to his friends &#8211; was born in 1927 in Aldrich, AL, to Charles Arthur Walker and... View Obituary & Service Information

The family of Charles A. Walker created this Life Tributes page to make it easy to share your memories.

Charles A. Walker Jr., a consummate family man and business and...