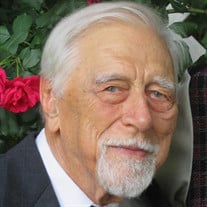 Chester Lehman Wenger, 102, (born 4/10/1918) died early Thursday morning, October 1, 2020. He died peacefully with family caring for him in his residence at Landis Homes, Lititz, PA, where he moved in January 2020. In his last days, he played... View Obituary & Service Information

The family of Chester Lehman Wenger created this Life Tributes page to make it easy to share your memories.

Send flowers to the Wenger family.