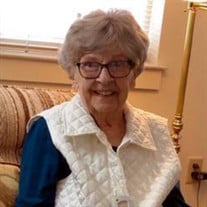 Christine Long Busche, 100, of Lancaster, PA, died at United Zion Retirement Community on Thursday, December 17, 2020. Born in Dayton, Ohio, she was the youngest of four children of the late Martin Luther Hecht. and Ella Matilda Hecht, nee Modler. The family soon moved to Cleveland, Ohio, where she graduated from Shaw High School in 1938 as class Vice-President. In high school, she played sports and was a member of leadership clubs. After graduation, she worked for Western Electric until the family moved to Columbus, Ohio in 1942, where she worked at her father’s restaurant. In 1943, she married Rev. Edward V. Long, and they served Lutheran congregations in Steubenville, Ohio; Toledo, Ohio; Galveston, Texas; and Austin, Texas (St. Martin’s) until he died in 1972. She remained in Austin until 1988, when she married Jack Messner, a high school friend, and moved back to Cleveland, where she lived until he died in 1997. In early 1998, she married Rev. Robert Busche and lived briefly on Long Island before he died late that year, after which she moved to Lancaster, Pennsylvania near her two sons. Christine was a stay-at-home mom who cared for her four children until they grew up, after which she took a position at the Austin Public Library, where she worked for many years. Later she worked as a representative of Lutheran Brotherhood Insurance, assisting LB’s local associations with service projects. She remained active at St. Martin’s after Ed died, serving on the Endowment Committee and as a Stephens Minister, and enjoying fellowship with other women in the Sip and Sew Club, who became lifelong friends. She also volunteered at Brackenridge Hospital and studied psychology at Austin Community College. In Ohio, she became a member of Advent Lutheran Church in Solon, Ohio, and enjoyed visits with the Hecht side of the family. After moving to Lancaster, she became a member of Holy Trinity Lutheran and then Zion Lutheran (East Petersburg), where her son Dan served as minister. She loved Bible study, singing in the church choir, reading, puzzles, sipping good scotch, and visits with her family. She especially enjoyed family vacations around the country and international travel to Europe, Israel and Central America. Later in life, she took up golf and became an avid fan. For her 100th birthday in August, she had a very special treat when her extended family from across the country joined a Zoom call to express their gratitude for what she meant to them and to celebrate the impact she had on their lives. Her family remembers her as a woman of great faithfulness, generosity, resilience and joyfulness in life, as one who supported her family with great pride in their accomplishments, and as a model for aging with grace and an ongoing sense of possibility. She is survived by two sons: Dr. Theodore E. Long (Betty), Rockland, ME, and Rev. Daniel M. Long (Kirsten Helin), Lancaster; and two daughters: Linda Isbell (Robert), Temple, TX and Deborah Long (Keith Montag), Eagle, CO, 8 grandchildren, 15 great-grandchildren and 1 great-great-grandchild. She was preceded in death by her sisters Evelyn and Winifred, and by her brother Martin. Christine’s cremains will be buried in Austin next to Ed, the greatest love of her life. Plans for memorial services await the end of the Covid pandemic. In lieu of flowers, contributions in Christine’s memory may be sent to Lutheran World Relief (www.lwr.org or PO box 17061, Baltimore, MD 21297).

The family of Christine Long Busche created this Life Tributes page to make it easy to share your memories.

Send flowers to the Busche family.