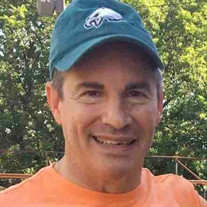 Chuck (Charles) Weyland, 61, of Lancaster and formerly of Marietta, shuffled off this mortal coil and entered The Great Wide Open on Friday, September 25. He died at home surrounded by family, friends and music. Chuck was a rare guy and so perhaps it is fitting that he had a rare disease, Progressive Supranuclear Palsy. PSP is a Prime of Life degenerative brain disease Chuck was diagnosed with in 2015. Born in Allentown, PA in April 1959, the son of Carl Mertens Weyland and Ellen (Grant) Weyland, Chuck grew up in Quakertown, PA – the Big Q – and graduated from Quakertown High School. His legendary soccer skills and mad oboe playing talents made an impression on many of his fellow Panthers, class of 1977. He followed his dream of going to Penn State, arriving in Happy Valley in 1977. Chuck’s ability to make friends, drink beer and party on (Garth) endeared him to many, some who became lifelong friends. He also managed to graduate on time with a degree in Environmental Resource Management in 1981. His career led him to Bethesda, MD and then to York, PA. On a whim, Chuck decided to move to Marietta after drinking beer in Shank’s Tavern one afternoon. He worked for ATEC, Buchart/Horn at Harley-Davidson, and lastly at High Company LLC in the Environmental, Health and Safety Department. Chuck was a lifelong steward of the earth and the king of compost, recycling and restoration. Relocating to Marietta eventually led Chuck to meet Mary Gildea, his wife of 28 years. Their wedding was a blast with the musical contributions of the Rastafarian band SOUP (Sounds of Uplifting Positivity). They have two amazing daughters, Julie Slabinksi (Steven) of Lancaster and Hannah Thompson (Jackson) of Akron, Ohio. He loved them fiercely and was immensely proud of their accomplishments, including Julie’s graduation from law school and Hannah’s goal scoring in the NCAA Division 3 soccer championship game. Chuck’s grandchildren – Jude, Owen, Luca, Annette and grandson due in December – were a constant source of joy and laughter for Pop Chuck as he was affectionately called. He is also survived by his sister, Kit Igusky (Bernard) of Reading, PA and Gregory (Kathryn) of Silver Spring, MD. He will be missed by his nieces and nephews and the dogs he had through life, including Suki, Herman, Sunny, Snoopy and Lucy, his latest BFF. If music be the food of love, then Chuck’s best memories are those associated with music. There are many, from dancing to Tom Tom Club’s “Genius of Love” while wearing punk sunglasses, harmonizing with Hannah on UB40’s “Rat in the Kitchen,” playing “Happy Birthday” on his saxophone every year for his daughters, wailing on the harmonica with his friends Jimmy D. and Tom on the patio at Papa Joe’s in The Buck, or listening to favorite artists such as Neil Young, Tom Petty and The Waterboys. He and Mary appreciated live music and attended many concerts over the years, from Richard Thompson at the Chameleon to the Grateful Dead at RFK Stadium to David Byrne in Hershey (best concert ever). Chuck always laughed at Mary’s rants about why Bob Dylan is THE MAN, and their collection of random lines from songs they sang together every time: “Is there gas in the car? Yes there’s gas in the car” from Steely Dan, “Somebody get me a cheeseburger” from Steve Miller, “I got blisters on my fingers” from The Beatles, ‘”Two turntables and a microphone” from Beck, “Tin roof – rusted” from the B52s and on and on. Per Chuck’s request, donations in his memory may be made to his favorite indie non-profit radio station, 88.5 WXPN, at 3025 Walnut Street, Philadelphia, PA 19104-3402. Chuck, the ultimate recycler, donated his body to Penn State Hershey’s Medical School for future PSU students to study. Roar, Chuckie, Roar. Family and friends may pay their respects to Chuck’s family on Friday, October 2, 2020 from 6 pm to 8 pm at The Groff Family Funeral Home, 528 West Orange Street, Lancaster, PA 17603. Chuck’s wishes were to ask those in attendance to proudly wear Blue and White colors.

Chuck (Charles) Weyland, 61, of Lancaster and formerly of Marietta, shuffled off this mortal coil and entered The Great Wide Open on Friday, September 25. He died at home surrounded by family, friends and music. Chuck was a rare guy and so perhaps... View Obituary & Service Information

The family of Chuck (Charles) Weyland created this Life Tributes page to make it easy to share your memories.

Chuck (Charles) Weyland, 61, of Lancaster and formerly of Marietta,...

Send flowers to the Weyland family.