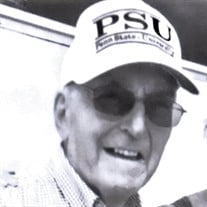 Daniel K. Lake, Sr., 91 of 220 Broadmoor Drive, Willow Street, PA, died on Wednesday, February 23, 2022 at The Glen at Willow Valley after a long illness. Born in Dover, N.J., he was the husband of the late Shirle Burkhart Lake, who passed away in 1998 after being married for 40 years. Mrs. Lake was from Clarks Summit, PA. He was the son of the late Norman M. and Helen Keller Lake. A Lancaster County resident since 1958, Dan was a 1949 (“a 49er”) graduate of Dover High School, N.J. where he played football and in 1948 defeated Morristown to win the New Jersey State Championship Title. In the summer of his high school junior year, he hitchhiked to Montreal, Canada, via Rt. 90, and during his 5-day trip, he spent $ 46.00. He was a 1952 graduate of Keystone Junior College, LaPlume, PA and in 1954 received a BSS in Civil Engineering at Penn State University. After college, he spent less than a year in the Army after being medically discharged. After the Army, Dan joined his father, Norman and brother, Richard, in the family Engineering and Surveying business; N.M. Lake, Inc., having offices in Willow Street, New Holland, and Oxford. They formed the Helen Keller Partnership which later managed the office buildings of the business. Mr. Lake served as the Engineer of Marietta Boro, including the townships of E. Drumore, Colerain, and Fulton. He then sold the business that became, Lake, Roeder, Hillard, and Beers. Mr. Lake served several terms as President of the Willow Street Lions Club. While a member of the club, he was Chairman of building the Willow Street Community Center. As President and Life Member of the PA Society of Land Surveyors, he educated H.S. students at Lampeter-Strasburg and Solanco on the importance of Land Surveying. Dan was instrumental in promoting the “Math Counts” program in High School which focused on helping students recognize the practical use of math in everyday life and occupation. As President of the Friendship Force, he hosted a group of Land Surveyors from the United States that traveled to Russia to share professional experience with newly privatized surveyors in Moscow. Also with the club, he traveled to and hosted families from Germany and Japan. Mr. Lake was a Lifetime Vestry member of St. James Episcopal Church, serving as the Property Committee Chairman for 24 years. Later he attended Bangor Episcopal Church, Churchtown, PA, serving on the Vestry and as a Jr. Warden. He is lovingly survived by three children, Pamela Lake Sampson, West Chester, PA, Christopher, husband of Mimi, Pequea, PA, and Daniel, Jr., husband of Doreen, Willow Street, PA; seven grandchildren, Cheri, wife of Mike Landberg, sharing 2 children of Egg Harbor, N.J., Kate, wife of Brian Newberry, Annapolis, MD, Greg, husband of Shannon Sampson, Park Ridge, IL, Jordan, Dylan, and Cheyenne Weber of Denver, CO, and Venessa Lake, Fort Mitchell, AL; three great-grandchildren, Max and Lyla, Annapolis, MD and Carter in Park Ridge, IL. Relatives and friends are invited to attend Daniel’s Funeral Service at St. James Episcopal Church, 119 N. Duke Street, Lancaster, PA on Saturday, April 23, 2022 at 11:00 a.m. The family will receive friends at the Chapel from 10:00 a.m. until the time of the service. In lieu of flowers, memorial contributions may be sent in Dan’s memory to St. James Episcopal Church, 119 N. Duke St., Lancaster, PA 17602, Bangor Episcopal Church, 2099 Main Street, Churchtown, Narvon, PA 17555 or the Willow Street Lions Club, P.O. Box 26, Willow Street, PA 17584

Daniel K. Lake, Sr., 91 of 220 Broadmoor Drive, Willow Street, PA, died on Wednesday, February 23, 2022 at The Glen at Willow Valley after a long illness. Born in Dover, N.J., he was the husband of the late Shirle Burkhart Lake, who passed... View Obituary & Service Information

The family of Daniel K. Lake Sr. created this Life Tributes page to make it easy to share your memories.

Send flowers to the Lake family.