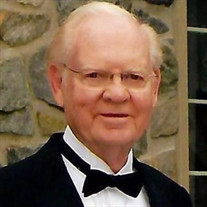 It is with a heavy heart that the family of David Sunden announce his death at the age of 95. He died peacefully after a short illness on Sunday, December 13, 2020, in Lancaster, PA, surrounded by loved ones. David was born May 9, 1925 in Harrington Park, NJ, the first born of Sven and Lillian Grange Sunden. He attended Harrington Park Public School, and before graduation from Dumont High School enlisted in the Navy, serving in the Pacific Theater. After the war, he enrolled in Wheaton College (IL), where he majored in Music, and met Marion Stam, who would go on to become his wife of 69 years. After graduation and marriage, the couple lived briefly in the Chicago area where Dave worked for radio station WMBI. While there, he also served as Youth Minister and Musical Director at Western Springs Baptist Church, participating in their long-running radio broadcast “Songs in the Night.” Dave and Marion then moved back home to Harrington Park, where Dave took up running the family business, The Harrington Press. From this base, he devoted his middle years to raising a family, running the business, and serving his God, his country, and his community in myriad ways. The family was active at Grace Church in Ridgewood, NJ, where Dave was Choir Director for a number of years, and faithfully served in every imaginable leadership position over the course of 45 years. In his community, he served as a Volunteer Fireman, was elected to the Borough Council for two terms, and served as a board member of the newly formed Harrington Park Public Library. He was an active member of the Bergenfield chapter of the Rotary Club, the Christian Business Men’s Association, and Gideons International and he served on the boards of African Inland Mission, Florence Christian Home, International Bible Society, and Evangelical Union of South America. He pursued his love of music and radio as the announcer and musical director for the weekly radio broadcast of the AMG International on WOR radio in New York. He was also Master of Ceremonies at concerts given by the Ted Cornell Chorale. Upon retirement in 1999, David and Marion moved to Willow Valley Communities outside of Lancaster, PA. There was little rest in their retirement as they both took every advantage of what their new community had to offer. Their adult children, when visiting, would often marvel at the energy they could spill into one day. Dave took up bowling and joined a local league, he participated in the Senior Olympics well into his 90s (winning several medals), was a member of the Camera Club, acted as Master of Ceremonies at the concerts of the community’s Chorale, was a volunteer usher at the Fulton Opera House, and was an active member of Calvary Church. One summer, he had the opportunity to conduct the Lancaster Symphony performing the National Anthem at an outdoor concert. He is survived by his wife, Marion, and brother, Howard; three children: Lawrence (and Mary), Scott (and Kristi), and Cathy (and Dana); and three grandchildren: Peter, Daniel, and Kerith. Among the many Bible verses he taught his children to memorize, John 10:10 stands as a good summary of David’s life: Jesus said: “I have come that they may have life and that they may have it more abundantly.” A Viewing will be held for family and friends on Thursday, December 17, 2020 from 2:00pm to 4:00pm at the Groff Family Funeral Home, 528 West Orange, Lancaster, PA 17603. A private family interment will be held at the Westwood Cemetery in Westwood, NJ. Donations in honor of David can be made to African Inland Mission or WMBI Moody Radio.

It is with a heavy heart that the family of David Sunden announce his death at the age of 95. He died peacefully after a short illness on Sunday, December 13, 2020, in Lancaster, PA, surrounded by loved ones. David was born May 9, 1925 in Harrington... View Obituary & Service Information

The family of David Sunden created this Life Tributes page to make it easy to share your memories.

It is with a heavy heart that the family of David Sunden announce...