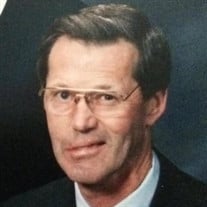 Dr. Donald M. Herr, 83, of Lancaster, passed away on Sunday, December 12, 2021 at home. Born in Refton, PA, he completed West Lampeter High School in 1955. He graduated from Franklin & Marshall College in 1959 and from the New York State College of Veterinary Medicine (Cornell) in 1963. He and his wife founded the Manheim Pike Veterinary Hospital in 1964. He was a pioneer in advanced veterinary dentistry. Dr. Herr was a trustee and member of the Board of Governors of the Pennsylvania Veterinary Medical Association, receiving the PVMA Award of Merit in 1982. He was a past Vice-President of the PVMA, and a founding member and PVMA liaison to the Veterinary Technicians and Assistants Association of Pennsylvania, of which he was a founding member. He was a lecturer, author, researcher, guest curator and collector of 18th and 19th century American pewter and Pennsylvania German Decorative Arts. Don was past President of the Pewter Collectors’ Club of America, president of the Mid-Atlantic Regional Group. He was member of the Collections Committee of the Lancaster County Historical Society and held memberships in the Landis Valley Museum Associates, Heritage Center Museum of Lancaster County, Lancaster Mennonite Historical Society, the Hans Herr Foundation, the Pennsylvania German Society, Winterthur Museum Associates and the Museum of American Folk Art. He was a nationally known hybridizer of Hemerocallis (daylilies) and received numerous awards, including the Bertrand Farr Silver Medal for “outstanding results in the field of daylily hybridizing” from the American Hemerocallis Society (AHS). Don was an accredited garden and exhibition judge, a life member of the AHS and lectured on his hybridizing program. He expressed his pride in local culture with daylily names such as “Rutchin” and “Ferhoodled.” The son of Maurice Groff Herr and Anna Martha Greider Herr of Refton, PA, he was predeceased by a brother, Dr. Harold Greider Herr. He is survived by his wife of 59 years, Dr. Patricia Louise Thomson Herr; a son, Roger Allan and partner Vincent Fiorenti, Brooklyn, NY; two daughters, Martha Anne, wife of James A. Brown, Linglestown, PA, and Elizabeth (Beth) Louise, wife of William B. Collier III, Marietta, GA. He is also survived by a sister, Mary Jane Graybill, Stevens, PA; and two grandchildren, Carolyn Elizabeth Brown and Aaron James Brown. Don was a 70-year member of Covenant United Methodist Church. He was proud of being a 9th generation Lancaster Countian and a direct descendent of the early Lancaster County settler Hans Herr. Relatives and friends are invited to attend a Funeral Service at Covenant United Methodist Church, 110 N. Mulberry Street, Lancaster PA on Thursday, December 16, 2021 at 11:00 a.m. with Rev. Dr. Quentin E. Wallace officiating. The family will receive friends at the Church from 10:00 a.m. until the time of the service. Private family interment will take place in Willow Street Mennonite Cemetery. Masks are recommended. In lieu of flowers, memorial contributions in Don’s memory may made to the Lancaster County Historical Society (Lancasterhistory.org).

Dr. Donald M. Herr, 83, of Lancaster, passed away on Sunday, December 12, 2021 at home. Born in Refton, PA, he completed West Lampeter High School in 1955. He graduated from Franklin & Marshall College in 1959 and from the New York State College... View Obituary & Service Information

The family of Donald M. Herr created this Life Tributes page to make it easy to share your memories.

Send flowers to the Herr family.