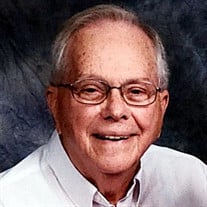 Donald Richard Tshudy, 89, went to be with the Lord on Thursday, October 22, 2020 at Hospice and Community Care with his family by his side in his final days. Born in Lancaster, PA, he was the son of the late Isaac Snyder Tshudy and Emma Mildred Smaling Tshudy. He was married to Betty Lundy Tshudy for 61 years. Don received his bachelor’s degrees in Geology and Chemistry from Franklin & Marshall College and his master’s degree in Business Administration from Penn State University. A lifelong learner, he never wavered from his passion for furthering his education. He worked as a Chemical Engineer and in other capacities at RCA, General Electric, Burle Industries and Phillips North America. He worked in product development and holds a patent in his name. He was a student of history and loved to share his knowledge as a tour guide on trips through Hershey, Gettysburg, Lancaster City, the Amish Country, and the city of Philadelphia. He also earned his Real Estate license and became a Master Gardener. Don was fascinated by family genealogy and extensively researched and documented his family’s history. Don and his wife enjoyed traveling and counted some of their favorite destinations as his wife's hometown of Mountain City, TN, western North Carolina, Europe, and San Francisco, CA where he ran across the Golden Gate Bridge. He was an avid baseball fan and spent many years coaching Little League baseball. Don enjoyed spending time with his grandchildren, especially on Saturdays when he often took them downtown in Lancaster city. He was also an active member of Westminster Presbyterian Church for 20 years. In addition to his wife Betty, Don is survived by his two daughters Lisa Anne Tshudy, Lancaster, Victoria Leigh Garner (Ray, Jr.), Leola, his son Douglas Scott Tshudy (Doris Sanchez), Lancaster, grandchildren Ray Eugene Garner III, Zachary Donald Garner, Lindsay Leigh Garner, Isaac Benjamin Tshudy (married to Leah Lael Burns on October 18, 2020), and Isaiah Stephen Tshudy. In addition to his parents, Don was preceded in death by his brother Robert L. Tshudy and his sister Thelma E. Tshudy. Family and friends are invited to a Funeral service on Thursday, October 29th, 2020 at 11:00am at The Groffs Family Funeral Home, 528 West Orange Street (corner of Orange and Pine St.) with Reverend Keith Irvine officiating. A time for viewing and visitation will be from 10:00am until the time of service. Interment will be at Willow Street Mennonite Cemetery, 399 East Penn Grant Road, Willow Street, PA. Memorial Contributions may be made in Donald’s name to the Westminster Presbyterian Church.

Donald Richard Tshudy, 89, went to be with the Lord on Thursday, October 22, 2020 at Hospice and Community Care with his family by his side in his final days. Born in Lancaster, PA, he was the son of the late Isaac Snyder Tshudy and Emma Mildred... View Obituary & Service Information

The family of Donald Richard Tshudy created this Life Tributes page to make it easy to share your memories.

Donald Richard Tshudy, 89, went to be with the Lord on Thursday,...

Send flowers to the Tshudy family.