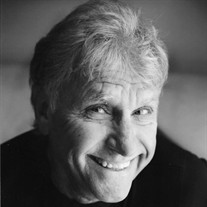 E. James Kunik, age 75, passed away peacefully at home in Lancaster on Tuesday evening, March 9th, 2021, after a brave battle with liver and pancreatic cancer this past year. With him were his sister Terry, hospice nurse and his loving partner of 15 years, Pat Levin. Jim was born on November 2nd, 1945 in Atlantic City, New Jersey to the late James E. Kunik of Atlantic City and the late Margaret A. Balog of Stanford, Conn. His father was an oral surgeon and his mother a nurse. Jim is survived by his two daughters, Chris Baeza and her husband, Jocksan and daughter Elia of Malvern, Pa. and Dana Jensen and her two children, Lucas and Skylar, and her partner Rob and his three children of Chester, Pa. Jim is survived by 6 sisters: Maryanne Dalton(Jimmy) of West Chester, Pa: Margie LaBelle(Denny) of Miami, Florida: Aggie Classen(Scott) of East Fallowfield, Pa: Denise Morris(Jim) of Port St. Lucie, Florida: Bernadette McIntyre(Harry)Glen Mills, Pa. and Terry Fidler(Bobby Olsen) Bellevue, NE. He is also survived by many nieces, nephews, cousins, business associates, college friends, business customers and the numerous friends he made during his lifetime. Jim grew up in the Drexel Hill area of Philadelphia, attending Bonner and eventually Villanova University where he received a BA in Psychology in 1967. He became an avid sports fan of Villanova Basketball, attending many games over the years with his friend John Ermillo, the "Dancing Daddy" of Villanova. From 1967 to 1970 Jim served as a Military Officer in the U.S. Army in Vietnam. He was a First Lieutenant Executive Officer for the 28th Engineering Battalion and had a Honorable Discharge in July 1970. Jim also received an Army Commendation Medal. He had recently signed up to mentor Veterans in Lancaster. After returning home from the war Jim began his long and successful career in the textile business, following in the footsteps of the Kunik family's history of tailoring and textiles. He earned an MBA in Marketing at Temple University, attended the Philadelphia College of Textile and Science and took the Dale Carnegie Sales Course, coming in first in his class. Jim won many awards over the years for his sales and marketing skills. In the last several years Jim sold quilting fabric to quilting business throughout several northeastern states, making friends with the owners who sent cards, called Jim and even made him a special quilt. Among his other interests, Jim was also a Life Master Bridge Player, a scratch golfer, a skilled skier, and a runner who ran triathlons to raise funds for the Leukemia Society. In recent years, Jim and Pat traveled around the world with friends and took an annual Christmas island cruise after their annual Christmas party. Jim had a zest for life and the energy to achieve many of his goals...a list of which he kept on his desk. He will be sorely missed by all who knew and loved him. Jim will be laid to rest next to his parents in Holy Cross Cemetery in Yeadon, Pa. at a gravesite service on May 1 at 10am. A celebration of Jim's life will be held in Lancaster later in the summer. In lieu of flowers, please send donations to Hospice and Community Care, 685 Good Drive, PO Box 4125 or at www.hospiceandcommunitycare.org in Jim Kunik's memory. A special thanks to Dr. Kerr and his staff at the Ann Barshinger Cancer Center in Lancaster for their kindness and professionalism in caring for Jim during these difficult times.

E. James Kunik, age 75, passed away peacefully at home in Lancaster on Tuesday evening, March 9th, 2021, after a brave battle with liver and pancreatic cancer this past year. With him were his sister Terry, hospice nurse and his loving partner... View Obituary & Service Information

The family of E. James Kunik created this Life Tributes page to make it easy to share your memories.

Send flowers to the Kunik family.