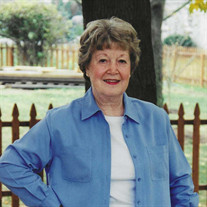 Edith M. Ramsey (nee Rowland), 88, of Lancaster, PA passed away peacefully on Friday April 29 , 2022. Born in Flushing, OH, Edith (Edy) was the daughter of Roy Dale and Mary Lorain (nee Anderson) Rowland. She was married to the late Eugene (Gene) Paul Ramsey, Jr. for 49 years until his death in 2002. Growing up on a farm outside Athens, OH, Edy was an excellent student and graduated from Athens High School in 1951. She enjoyed her first job with Royal McBee an office machine manufacturer in Athens, where she had an administrative role. Edy and Gene married on February 14, 1954. He would begin Officer Candidate School for the US Navy shortly thereafter and they moved to Virginia Beach, VA where they started their family. Edy and Gene moved to Lancaster, PA in 1970 where she worked as a supervisor at Great American Insurance Company for over 25 years. She later joined the Paul Sheaffer Agency in Intercourse, PA, retiring in 2010. She was the queen of casseroles, loved baking, was a hard worker, and was deeply involved in church events and fundraising. Edy had a lovely sense of humor, was a kind, generous and humble person who had a graceful way of making others feel comforted, supported, and cared for. She was adored by her family and friends and will be greatly missed. Edy is survived by her three daughters, Lorain Ramsey Matthews (Christopher), Newton, MA, Kimberly R. Leff (David), Doylestown, PA, Carolyn L. Ramsey, fiancé of Jeff Wible, Pittsburgh, PA, grandchildren: Lauren, Maddie, Ian, Connor, and Braeden, sister, Margaret Wright, NY, cousin, Phyllis Fischer, OH and nieces and nephews: Jane, Mary, Linda and Allison. Family and friends are invited to Edy’s Funeral Service to be held at Faith United Methodist Church, 1290 Fruitville Pike, Lititz PA 17543, on Monday, May 9, 2022 at 11 a.m. with The Rev. Jason Perkowski officiating. The family will receive friends beginning at 10 a.m. with a luncheon to follow the service at the church. The service will be livestreamed thru the church website at www.faithumc.us. Interment for the family will be held at Conestoga Memorial Park. Memorial contributions may be made in Edy’s name to Faith United Methodist Church, 1290 Fruitville Pike, Lititz, PA 17543 or to the charity of your choice.

The family of Edith M. Ramsey created this Life Tributes page to make it easy to share your memories.

Send flowers to the Ramsey family.