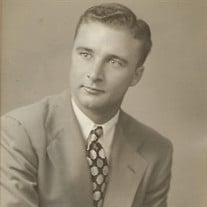 Edward Roscoe Mellinger, Jr., 96, of Lancaster, passed away on Monday, November 15, 2021. He was the beloved husband of Anne Mellinger (nee Cook) and together they celebrated their 70th Wedding Anniversary on September 29, 2021. He was the devoted father of Edward R. Mellinger, III, (Cyndee Beck), of Lancaster, Andrea Houtz, (Robert) of Ephrata, and Lawrence P. Mellinger, (Joyce Hall), of Fernandina Beach, Florida. He was affectionately called Poppop by his fourteen grandchildren and twelve great grandchildren. He leaves behind many devoted nieces and nephews, and is also survived by his sister, Georgia Reichert, of Whidbey Island, Washington. He was preceded in death by three sisters, June Cox, Ruth Achorn, and Joan Schwarzwaelder. Born in Bethlehem, PA, to Edward R. Mellinger, Sr. and Ruth E. Mellinger (nee Flock). He was proud of his ancestry which ran seven generations deep in Lancaster County. He graduated from McCaskey High School a semester early to volunteer for the Army Air Corps during World War II. He earned his B.A. from Franklin and Marshall College in 1950. After College, he worked briefly for the Daily News, in Philadelphia, where he met and married his wife, Anne. Soon after they wed, the couple moved to Lancaster, where their three children were born, and Ed went into business as a Realtor and Insurance broker. In 1976 he purchased the Lancaster Business School, which had been established in 1853. During his 20 years as owner and President of the School, he expanded enrollment, and in 1980 purchased the historic building at the southwest corner of Chestnut and Charlotte Streets, where he moved the school from its original location on North Queen Street. Always interested in politics, Ed ran in the Republican primary for U.S. Congress in 1966, and again in 1974. In his retirement, Ed continued his active interest in public affairs, but was most devoted to spending time with his family. The family is grateful for all the loving care provided by the Veterans Administration, Senior Helpers, Kindred Hospice, and Legends of Lititz. A Funeral Service for family and friends will be held at The Groffs Family Funeral Home, 528 W. Orange Street, Lancaster, on Saturday, November 20, at 1:30 p.m. with Reverend LeRoy Greer officiating. A viewing will be held at 1:00 p.m. until the time of service. The interment will be at Millersville Mennonite Cemetery. For those unable to attend the service in person, you will be able to view Edwards service online at https://client.tribucast.com/tcid/2324573101 In lieu of flowers, the family requests that donations be made to a Veterans Organization of the donor’s choice.

Edward Roscoe Mellinger, Jr., 96, of Lancaster, passed away on Monday, November 15, 2021. He was the beloved husband of Anne Mellinger (nee Cook) and together they celebrated their 70th Wedding Anniversary on September 29, 2021. He was the... View Obituary & Service Information

The family of Edward Roscoe Mellinger, Jr. created this Life Tributes page to make it easy to share your memories.

Edward Roscoe Mellinger, Jr., 96, of Lancaster, passed away on...

Send flowers to the Mellinger, family.