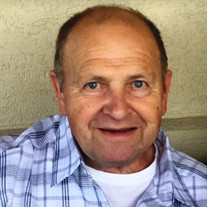 It is with deep sorrow we announce the passing of Effinger Claire “Butch” Blantz, Jr. 72, of Lancaster, PA on Thursday, January 13, 2022. He was the son of the late Effinger C. and Betty (Asper) Blantz. He was the devout husband of his one and only true love Sandra Lee (Speece) Blantz who preceded him in death on October 17, 1996. Butch worked at the Schmitt’s Aluminum Foundry from his late teens until starting his business, D&D Cleaning, in 1983, which he owned and operated for nearly 30 years until retiring in 2020. He was a fan of the Miami Dolphins and Washington Redskins and liked watching the games with his family and friends. He enjoyed watching the Three Stooges and listening to The Shadow Radio Show. He was a hard worker who spent a lot of time doing yard work and kept a beautiful lawn. Most of all, he enjoyed visits with his daughters and son-in-laws, grandchildren, great-grandchildren, and best friend, James “Spoon” Witherspoon, by whom he will be sorely missed. He will be remembered as a kind and loving family man who wouldn’t hesitate to lend a helping hand to anyone in need. Left to cherish his memory are his daughters: Denise J. (Robert) Yingst and Deborah K. Blantz; grandchildren: Nathan J. (Autumn) Yingst, Nicholas R. (Jeanette) Yingst, and Taryn D. Blantz (Shayne E. Henry): great-grandchildren: Amour S., Atlas B., Jude N., Norah J., and Graham L.; sisters, Ruth Wilson and Mary (John) Mahey; and many friends who were like family. Family and friends are invited to attend Butch’s Funeral Service on Thursday, January 20, 2022 at 11:00 a.m. at The Groffs Family Funeral Home, 528 W. Orange Street, Lancaster. The family will have a visitation from 10:30 a.m. until the time of service. There will be a private interment at Millersville Mennonite Cemetery. Memorial Contributions may be made in Butch’s name to Special Olympics at https://www.specialolympics.org/get-involved/donate or American Cancer Society at www.cancer.org.

It is with deep sorrow we announce the passing of Effinger Claire &#8220;Butch&#8221; Blantz, Jr. 72, of Lancaster, PA on Thursday, January 13, 2022. He was the son of the late Effinger C. and Betty (Asper) Blantz. He was the devout husband... View Obituary & Service Information

The family of Effinger Claire Blantz, Jr. created this Life Tributes page to make it easy to share your memories.

It is with deep sorrow we announce the passing of Effinger Claire...

Send flowers to the Blantz, family.