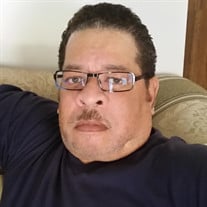 Eli S. Williams, 69, of Lancaster, PA, transitioned into glory on Saturday, April 23, 2022. He was the son of the late Theodore Roosevelt Williams, Sr. and Patricia Ann (Hart) Williams. His schooling with the School District of Lancaster began at Reigart School. He moved on to George Washington Elementary, Edward Hand Jr. High and J.P. McCaskey High School. He was a member of the swim team while attending Edward Hand Jr. High. He enjoyed all the adventures that came with being a Boy Scout (Troop 104). He was on the soccer team at McCaskey and graduated in 1971. He then moved on to attend Millersville University. His time there was shortened due to him being drafted into the United States Air Force where he proudly served. Moving into the workforce, Eli was a member of the Lancaster City Auxiliary Police Force serving as an accident investigator; a position he thoroughly enjoyed. For the next couple of years, he worked at RCA and then Armstrong World Industries. He found a passion in his final career as a Pennsylvania State Constable. He served the magistrate courts located in the Southeast section of Lancaster. He experienced a sense of fulfillment when his words and actions led to a positive change. He was an active member of the Constable Association. He leaves behind his wife of 42 years, Janet L. Williams, former SDOL teacher from Morton, PA; an Aunt Mary Bohee; two brothers, Ted and Gregg; a sister, Kim; and a host of children, grandchildren, great-grandchildren, in-laws, cousins, nieces, and nephews. A viewing will be held at The Groffs Family Funeral Home, 528 W. Orange Street, Lancaster on Monday, May 2, 2022, from 10:00 a.m. to 12:00 p.m. A time of remembering will be from 11:30 a.m. until 12:00 p.m. A private graveside burial will be reserved for family. We thank you for your support during this difficult time.

Eli S. Williams, 69, of Lancaster, PA, transitioned into glory on Saturday, April 23, 2022. He was the son of the late Theodore Roosevelt Williams, Sr. and Patricia Ann (Hart) Williams. His schooling with the School District of Lancaster began... View Obituary & Service Information

The family of Eli S. Williams created this Life Tributes page to make it easy to share your memories.

Send flowers to the Williams family.