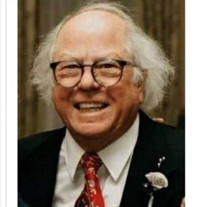 Lifelong Chicago Cubs fan Eric Berman was finally called to Catalina Island for spring training after a prolonged and admirable battle with cancer. He was surrounded by love when he departed for center field. A longtime resident of Lancaster and Mount Joy, PA, Eric lived many lives in his 77 years. Born in Chicago, Illinois, Eric was the baby of the family; son to furrier Phil Berman and actress Helen (Erickson) Berman and brother to Phil Jr. (Bud) Berman, Yonah Smith, and Janet Berman. Eric graduated from Lake View High School before moving to Laramie to attend the University of Wyoming where he obtained a BA and an MA in Economics with a minor in music. Less interested in academic rigor, Eric flourished in college as a mediocre but enthusiastic musician. When his scheme to join the marching band with a seemingly unpopular instrument choice was thwarted by a slightly better French horn player, Eric was instead asked to carry a sonically superfluous tuba. Donned proudly, Eric’s tuba played double duty with a bell wide enough to put the “G” in Wyoming and deep enough to conceal the fraternal flasks. Eric was a consummate comedian. “I love nonsense” he’d say, explaining why he’d listed the family dogs in the phonebook or reveling in the memory of hiding hotdog slices in his mother’s Jell-O mold. After co-founding his college’s first student-run radio station (KUWR), Eric took to the national airways as “Leonard B. Foxe” and is suspected to be the only DJ ever known to interview with the wind. His unique sense of humor allowed him to connect with anyone and was foundational for everything he did in his life. Unsurprisingly Eric’s broadcasting career was brief, but it landed him in Lancaster where he cultivated a charmed and storied life. His parent-approved career began as an ad-man for Armstrong, successfully extolling the virtues of vinyl flooring across America. Desiring a more creative life, Eric ditched the suit to partner with his wife and a handful of immensely talented tradesfolk in restoring historic homes in Lancaster. Eventually, he returned to school and would later note his time at Mount Joy Vo Tech as a highlight of his life; giving him the opportunity to both learn and mentor, and ultimately uncovering his passion for building birdhouses from felled barnwood and copper. A longtime member of the PA Guild of Craftsman, Erickson Birdhouses were a staple of the mid-Atlantic craft show circuit and remain a fixture for backyard birds across the globe. Eric’s humor and ambition were matched only by his generosity. He dedicated countless hours volunteering and raising thousands for the arts, education, and conservation. Eric proudly served as a member of the Historical Commission, former President of the Boys & Girls Club, and “Coach” to an entire generation of Mount Joy little leaguers. Never forgetting his station, Eric worked in service of his community throughout his life. In his latter years, Eric greatly enjoyed schmoozing at the Hamilton Club, going down the shore, and subjecting his family to long-winded stories over cocktails. In his latter months, he fancied flirting with nurses and keeping his beloved home health aides on their toes. Eric lived on his own terms, created his own stage, and never missed an opportunity for a laugh. “The Cubs won’t be any good this year,” he predicted from his deathbed. He awaits his official 2022 jersey. Eric is survived by his daughter, Sarah Berman (Ian McAndrew), his son, Jeffrey Berman (Katherine Warrick), his long-time partner, Jane Eddy and her daughter, Caroline Eddy, his former spouse Pixie Berman, and his grandson, Thaddeus Berman. Eric will also be missed by extended family across the country and a great number of dear friends. Services will be held at Lancaster Country Club on Saturday, May 7, 2022 at 11:00 a.m. To view the service click the following link: https://client.tribucast.com/tcid/8421225780. In lieu of flowers, donations can be made to some of Eric’s favorite charities: Lancaster Conservancy, Lancaster Historical Commission, and the Anne B. Barshinger Cancer Institute.

Lifelong Chicago Cubs fan Eric Berman was finally called to Catalina Island for spring training after a prolonged and admirable battle with cancer. He was surrounded by love when he departed for center field. A longtime resident of Lancaster... View Obituary & Service Information

The family of Eric Berman created this Life Tributes page to make it easy to share your memories.

Send flowers to the Berman family.