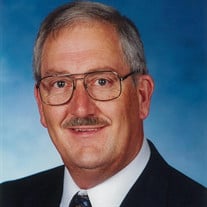 Eugene (Gene) Ray Frey, 76, of Lancaster, passed away on June 3, 2021 at Lancaster General Hospital. Born and raised in Chambersburg, PA, he was the son of the late Adin and Janet Frey, and the loving husband of Hazel M. Frey for 54 years. They were married on December 18, 1966. Gene was born and raised on the family farm in Franklin County, PA. He graduated from Chambersburg Area High School, and Eastern Mennonite University, Harrisonburg, Virginia with a B.S. degree in History. He later took additional courses at Pennsylvania State University, University Park, PA in the areas of Quality Control, Dairy Processing, and Ice Cream Manufacturing. Gene’s love of agriculture began in his early years. He spent time working in dairy plant production and operations management at the family farm’s dairy, processing dairy products and manufacturing ice cream. Gene and his family left the family’s dairy and spent several years living in Tanzania, East Africa, where he and his wife taught at the Mennonite Theological College. Upon returning from Tanzania, he continued to work in the agriculture industry for several different companies as a milk production specialist - at Dairymen Inc., Hershey Foods Corporation, and Land O’Lakes, Inc. During his years in the industry, he served for 16 years as the Secretary and Delegate for the PA Association for Milk, Food and Environmental Sanitarians. He also served as the President of the PA Southeast Dairy Sanitarian’s Association, and participated in various other agriculture-related professional organizations. Gene received numerous awards and recognition for his service within the industry. Gene deeply loved his family, and was a dedicated husband, father, and grandfather. He enjoyed spending time with family members, especially his adult children and grandchildren. His favorite activities included taking his grandchildren on annual trips to the PA Farm Show and traveling with them to special vacation sites. He spent time on long walks with his beloved dogs, as well as his children and grandchildren. These special “Walks with Grandpa” were valuable moments for Gene to remain closely connected to the family. He looked for any opportunity to share his passion of the dairy industry with others, including making and sharing homemade grapenut ice cream – a favorite of many people. Gene also enjoyed collecting antique model trucks, painting in oils, and reading. He was fondly known as a ‘history buff” through his love of books. Gene is survived, in addition to his wife Hazel by two children: Robin Felty (Chad) of Lititz, PA, and Derek Frey of Lancaster, PA, and his grandchildren Caleb Setlock and Ian Felty. He is also survived by siblings Linda Horst (John), Clear Spring, MD; Fern Diller (Eugene), Greencastle, PA; Miriam Hawbaker (Wayne), Greencastle, PA; and Wilmer Frey (Serita), Deerfield, NH. He was preceded in death by a brother, Robert Frey (Dorothy). A funeral service will be held at 10:30am on Saturday, June 12, 2021 at Living Hope Community Church, 2823 Columbia Ave, Lancaster, PA, with Pastor Ron Ressler and Pastor Karl Landis officiating. Family and friends are invited to a viewing from 9:30-10:30am or until the time of the service. A viewing will also be held on Friday, June 11, from 6:00-8:00pm at the Groffs Family Funeral & Cremation Services, 528 W. Orange Street, Lancaster, PA. The burial will be private for immediate family at the Millersville Mennonite Cemetery, Millersville, PA following the service on June 12. In lieu of flowers, memorial contributions may be made to Friends of Shirati, P.O. Box 10903, Lancaster, PA 17605. Friends of Shirati is a nonprofit organization that provides medical support, educational and developmental assistance to Shirati Hospital in Tanzania, East Africa. Friends of Shirati engage and support the ongoing work of Shirati Hospital, Shirati College of Health Sciences and the Shirati Leprosy community.

Eugene (Gene) Ray Frey, 76, of Lancaster, passed away on June 3, 2021 at Lancaster General Hospital. Born and raised in Chambersburg, PA, he was the son of the late Adin and Janet Frey, and the loving husband of Hazel M. Frey for 54 years. They... View Obituary & Service Information

The family of Eugene (Gene) Ray Frey created this Life Tributes page to make it easy to share your memories.

Send flowers to the Frey family.