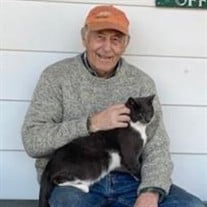 Frederick Nevin Schroeder, Sr. ‘Fritz’ ‘Poppi’ passed away peacefully in his sleep Sunday morning December 6, 2020 after battling cancer for many years. He was the son of the late Jay Nevin, Jr. and Katrina McGovern Falck Schroeder. Fritz is survived by his son, Fritz Jr., and his wife, Mary, a grandson, Ezra, as well as his brothers, Robert L. Schroeder and Jay N. Schroeder. He was preceded in death by his loving wife, Patricia Pollard Schroeder who died in September 2014. Fritz was a graduate of Manheim Twp. High School before attending and graduating from Ambler College in 1961 with an associate degree in landscape design. He went on to graduate from Michigan State University with a bachelor’s degree in horticulture and landscape design. In 1979, he formed Schroeder Gardens, Inc. a company he continued to run until his passing. Schroeder’s restoration projects in the Lancaster area include the Demuth Foundation and Rock Ford Plantation. He was a long-time board member of the Tanger Arboretum at the Lancaster History campus. Schroeder treated every landscape as a palette and took pride in hand-selecting and placing every plant, tree, or shrub to get the right mix of color, height and privacy. For over 20 years, Schroeder Gardens has provided street and park trees to the City of Lancaster a point of particular pride for Fritz who was most at home outside in the garden or in his nursery. Fritz loved to plan trips and travel, with the nickname Captain Kodak, no tour or walk was fast as every moment was caught on film. With his wife Pat they traversed Europe and traveled to the Galapagos Islands. With other fathers and sons, he hiked Mt. Washington and spent 10 days in the wilds of Canada. In the last ten years, he ventured to Tanzania to hike Kilimanjaro and capped off his travel with his son in Cuba soon after the travel ban was lifted. Fritz always spent his travels asking lots of questions, endeared himself to local cultures and people, and could get lost easily in the moment. He worked himself in and out of many close calls that would inevitably become funny family stories. He was a longtime member of the Lancaster Country Club and the Pirates Club. If you are inspired by Fritz’s love of nature, please consider a gift in his memory to the Lancaster Conservancy. The family will be planning a springtime Celebration of Life event at the Tree Nursery. A private interment will be held in Woodward Hill Cemetery.

Frederick Nevin Schroeder, Sr. &#8216;Fritz&#8217; &#8216;Poppi&#8217; passed away peacefully in his sleep Sunday morning December 6, 2020 after battling cancer for many years. He was the son of the late Jay Nevin, Jr. and Katrina McGovern... View Obituary & Service Information

The family of Frederick Nevin Schroeder, Sr. created this Life Tributes page to make it easy to share your memories.

Send flowers to the Schroeder, family.