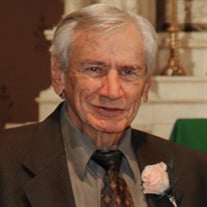 George E. Weber, 85, of Willow Street, PA, passed away on Monday, April 12, 2021 at Lancaster General Hospital. He was born in Lancaster, PA, the son of the late Albert C. and Emma (Arnold) Weber. George was married to Joanne M. (McFadden) Weber. He retired from Warner Lambert in Lititz as a machinist and served in the US Air Force during the Korean War. He was a member of St. Joseph Catholic Church in Lancaster and was active in the St. Joseph Catholic Club. George coached midget football and basketball. He played basketball and softball in the Industrial League for Warner Lambert, and he volunteered in scouting. In addition to his wife, Joanne, he is survived by his children, Dorothy Shearer (Larry), George Weber (Margaret), Susan Weber, and Joan Wurster (Thomas); his grandchildren, Stacy, Travis, Ashley, Nate, Kyle, Matthias, and Hannah; fifteen great-grandchildren; and his brother, Thomas Weber (Maria). Preceding him in death were his siblings, Albert C. Weber, Jr., and Joanne Caterbone. Mass of Christian Burial will be on Friday, April 16, 2021 at 11:00 a.m. at St. Joseph Catholic Church, 440 St. Joseph Street, Lancaster, PA. The family will receive friends at church following the mass. Burial will be private. In lieu of flowers contributions in his name can be made to Hospice & Community Care, 685 Good Drive, Lancaster, PA 17603.

The family of George E. Weber created this Life Tributes page to make it easy to share your memories.

Send flowers to the Weber family.