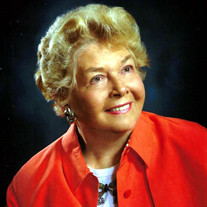 Gloria Boone Franklin, 96, of Tequesta, Florida and Berwyn, Pennsylvania, passed away on Monday, August 24th, 2020. Gloria was a vivacious and charismatic woman; her magnetism could be felt by all who encountered her. She was known as “Glo” by friends and loved ones, a name truly befitting her radiant personality. Born in Lancaster, PA, she was the daughter of the late Grover Cleveland Boone and Ethel Mae (Geisler) Boone. Glo grew up on North Pine Street, Lancaster, during the Depression in a home that was never lacking in love and happiness. Upon graduation from McCaskey High School, Glo went to work at Armstrong Cork Company as a mail girl. She posed as a photographer’s model in the company's magazine advertisements. She had the privilege to pursue her passion for art by attending the Philadelphia College of Art. Glo was a lover of beauty, which expressed itself through her many talents; her love of gardening, oil and watercolor painting, doll making, fashion and design. She used her creative abilities and work ethic to establish and run the Carriage Trade dress shop, which became the Main Line’s premier woman’s clothing store. Later, she also opened the Red Hen, the southern sister store in Tequesta, Florida. It was not uncommon for celebrities and even president’s wives and daughters to shop at these stores. After marrying Bob Franklin, an avid golfer, Glo decided she wanted to learn how to play the game. She went on to become a three-time Women’s Club Champion at Aronimink Golf Club in Newton Square, Pa. Glo and Bob developed friendships with and often hosted several professional golfers, especially the well-known Chi Chi Rodríguez. Glo and Bob were avid boaters and enjoyed many trips from Florida to the Bahamas with friends aboard. There, they enjoyed snorkeling, fishing for grouper, and lobster hunting. They also owned several racehorses. Glo was a lover of animals, often with a dog or two in tow, or attracting stray cats, runaway swans and even wild raccoons into her life. Gloria was a member of Jupiter First Church. A highlight for her was traveling to Israel with fellow church members. She loved to travel and visited many beautiful places in her life. Glo was devoted to and loved her family. She always looked forward to making yearly trips to the Boone Reunion in the mountains of western North Carolina where her father was born and raised. She hosted countless family Christmases and 4th of July family gatherings at her beloved home in Berwyn, Pa. She was always the life of the party, and an animated story teller, with hours and hours of tales to share from her fascinating life. Gloria was a loving woman, who loved life and felt privileged to experience a very full and blessed one. She was one of those extraordinary people you may only meet once in a lifetime. Gloria is survived by her son, Kenneth McCormick (Valerie) of Birchrunville, PA, her sister, Patricia Boone Herweh (John) of Lancaster, PA, her grandchildren: Megan McCormick, Keenan McCormick, and Manita Hartley (Mike), her friend of 40 years Anne Coll, and many nieces, nephews and loving friends. In addition to her parents, Gloria is preceded in death by her husband, Robert Franklin, and her sisters: Virginia Bare, Mary Hertzler, and Sylvia Jackson. A Funeral Service will be held on Tuesday, September 1, 2020 at 2:00 p.m. at The Groffs Family Funeral Home, 528 West Orange Street, Lancaster, PA 17603. Friends are welcome to greet the family at 1:00 p.m. at the funeral home. Interment will immediately follow at Mellinger Mennonite Cemetery. The family wishes to include everyone and will make available a live webcast of the service starting at 2:00 p.m. that can be found at https://client.tribucast.com/tcid/73360947 In lieu of flowers, please make donations to the Salvation Army, 131 S. Queen St., Lancaster, PA 17602, and or Food for the Poor, 6401 Lyons Road, Coconut Creek, FL 33073.

Gloria Boone Franklin, 96, of Tequesta, Florida and Berwyn, Pennsylvania, passed away on Monday, August 24th, 2020. Gloria was a vivacious and charismatic woman; her magnetism could be felt by all who encountered her. She was known as &#8220;Glo&#8221;... View Obituary & Service Information

The family of Gloria Boone Franklin created this Life Tributes page to make it easy to share your memories.

Send flowers to the Franklin family.