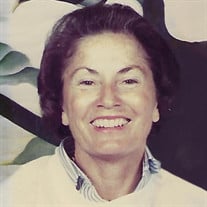 Gloria Sellers Hess, 93, born December 23, 1927, passed away June 20, 2021 at Penn Medicine Lancaster General Hospital. She was the widow of John J. “Jack” Hess II who died on December 31, 2003. She was the daughter of Katherine Scott and Ralph Sellers, and the stepdaughter to George Ness Spalding. Gloria was born and raised in Lancaster County. She attended Lancaster Catholic and graduated from Manheim Township High School. Later she furthered her education at the Philadelphia School of Fine Art. In earlier days, she and her husband of over 50 happy years had a wide circle of friends and lived part time in Boynton Beach, FL. There they enjoyed golf, tennis, and being warm. Gloria had 7 holes in one in her years of playing golf. She was a long-time member of The Lancaster Country Club, The Hamilton Club, Del Ray Dunes Country Club, The Junior League, the former St. Joseph Hospital Auxiliary, and St. Leo The Great Catholic Church. Gloria is survived by her daughter, Patricia Hess Pollard, granddaughter, Hillary Elizabeth Hess, grandson, Alexander S. Hess, and great-grandson, Mekhi J. Hess. She is also survived by a very supportive stepfamily including stepsister, Edith, wife of Dave Heckle, and their children Pamela Whallon, wife of Pete, who was always there for Gloria to the eternal appreciation of the family, Sally Summers, wife of Rob, Mary Welk, and David Heckle, husband of Melanie. In addition to her husband, John J. (Jack) Hess, II, she was predeceased by her son, John J. Hess III. The family would like to thank Homestead Village and the nurses and doctors at Penn Medicine Lancaster General Hospital for their extraordinary kindness in treating Gloria. Interment will take place Saturday, June 26, 2021 at Our Lady of Consolation Cemetery, Parkesburg, followed by a family picnic at the Heckle Farm. Donations in her honor to the Lancaster Humane Society or the charity of your choice.

The family of Gloria Sellers Hess created this Life Tributes page to make it easy to share your memories.

Send flowers to the Hess family.