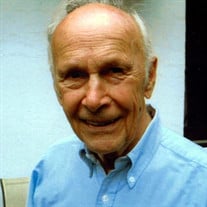 Hans “Opa” Karl Jenny, 100, of Lancaster, PA passed away on Thursday, April 2, 2020. Born in Glarus, Switzerland, he was the son of the late Johannes Jenny and Anna Jakober Jenny. To his family and friends, Hans was known was “Opa”. As a young child, Opa had the experience of growing up in Mexico and Switzerland. Hans served in the Swiss Army during World War II. He received his BS and MS degrees in Engineering and Electronics from the Swiss Federal Institute of Technology. Shortly after the end of the war, Hans embarked on his career in the United States. He spent the next 40 years working for RCA (Radio Corporation of America); and was very proud of his work, especially his leadership on the Lunar Excursion Module radar system, which guided the first men to the moon’s surface and safely back to the main craft. He was elected as a Fellow of IEEE in 1965. Hans met the love his life Hanny Beerli on his first visit back to Switzerland in 1948 at a Swiss ski resort named Arosa. Just six days after meeting, he proposed and they were married six months later. In 2019, Hans and Hanny celebrated both their 70th Anniversary and Hans’ 100th birthday in Lancaster, surrounded by their large and loving extended family and friends. He was a pioneer in many ways. From spending his childhood days in the jungles of Mexico to climbing and skiing the Swiss Alps; to coming to America on a freighter to helping land the first men on the moon. Hans learned and spoke five different languages. At the age of 40, he suffered a heart attack and became one of the first to embrace aerobics and jogging. He ran and skied until he was 90 years old. Hans was a founding member of the Lancaster Ski Club since 1946. But what came first for Hans was his family. His love and devotion to Hanny was a beacon for all. His dedication to his children and grandchildren will remain with them forever. And his love of the mountains and his native Switzerland has been deeply instilled in the next generations of the family. Hans is survived by his wife, Hanny of Lancaster and his three children, Hans-Dietrich of Saint George, VT, Christopher and his wife Andrea of Wayland, MA, and Susanne Maldonado, of Mount Joy. He was the cherished “Opa” to eight adoring grandchildren, Jade, Justin, Cedric, Alexander, Christopher, Lauren, Elizabeth, and Hans-Christian. Hans will be greatly missed by his family and friends, as well as the wonderful staff at Willow Valley, who always tended to him with love, kindness, and compassion. There will be a celebration of Hans’ life at a later date. In lieu of flowers, donations can be made to The Unitarian Universalist Church of Lancaster 538 W Chestnut St, Lancaster, PA 17603, and/or Doctors Without Borders Doctors Without Borders USA, P.O. Box 5030, Hagerstown, MD 21741.

The family of Hans Karl Jenny created this Life Tributes page to make it easy to share your memories.

Send flowers to the Jenny family.