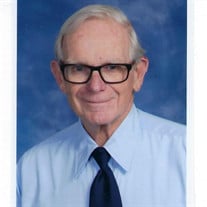 Harold Martin Good, Lancaster, died on Thursday evening, June 20, 2019 at Hospice and Community Care, Mount Joy, PA, after a two-and-a-half-year battle with pancreatic cancer. He was born on August 23,1935 at the family homestead in Leacock Twp., Lancaster County, to the late Grace (Esbenshade) and H. Raymond Good. He formerly lived in New Holland and Duncannon, PA. Harold is survived by his best friend and wife of nearly 62 years, Norma (Heisey) Good; sister Hazel Weaver and husband Donald of New Holland; daughter Martine Good-Ewell and husband Scott Ewell of Glen Rock; and son Marlin Good and wife Carole of Lebanon. He was the proud “Pop-pop” to Lindsey Good, Emiline Lyell (Matthew), Melanie Good, Hugo W. Schroeder IV, Doraleen Schroeder, and Martin I. G. Schroeder. He also is survived by two great-grandchildren with another expected in July. Additionally, two sisters-in-law, seven nieces, four nephews, their spouses and children, as well as many friends and former customers, all loved spending time with “Goodie.” Throughout his life, Harold enjoyed the companionship of his dogs, most of whom were labs. Harold graduated from New Holland High School in 1953, then worked as an auto mechanic in New Holland. He served in an ordinance unit in the U.S. Army from 1955-1958. Then for 32 years, Goodie worked as a Snap-On Tool dealer in first Lancaster County and then the greater Harrisburg/West Shore area. Harold was a 51-year member of Christiana Lodge #417, F. & A. M. Most importantly, he was a “cradle Lutheran,” and, at the time of his death, held dual membership with The Evangelical Lutheran Church of the Redeemer and Holy Spirit Lutheran Church, both of Lancaster. He volunteered for Lutheran World Relief and Heifer International, serving as a member of the South East PA Heifer Volunteer Committee. Relatives and friends are respectfully invited to Harold’s Funeral Service at The Groffs Family Funeral Home, 528 W. Orange Street (corner of W. Orange and Pine Streets), Lancaster, PA, on Wednesday, June 26, 2019 at 11:00 a.m. with The Reverends Clifton Eshbach, Russell Rockwell and Daniel Yeiser officiating. A viewing will be held at The Groffs Family Funeral Home on Tuesday, June 25 from 6:00 p.m. to 8:00 p.m. and for one hour prior to the service beginning at 10:00 a.m. on Wednesday. The interment will be at the convenience of the family in the cemetery of Trinity Lutheran Church, New Holland, the congregation where he was baptized, confirmed, and actively served for many years. In lieu of flowers, memorial contributions can be made to either Holy Spirit Lutheran Church, 3131 Columbia Ave., Lancaster, PA 17603 or to Redeemer Lutheran Church, 818 Fifth St., Lancaster, PA 17603; kindly state “unrestricted memorials” in Harold’s name.

Harold Martin Good, Lancaster, died on Thursday evening, June 20, 2019 at Hospice and Community Care, Mount Joy, PA, after a two-and-a-half-year battle with pancreatic cancer. He was born on August 23,1935 at the family homestead in Leacock... View Obituary & Service Information

The family of Harold Martin Good created this Life Tributes page to make it easy to share your memories.

Send flowers to the Good family.