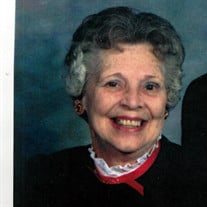 Helen P. Thatcher, 99, of Lancaster, PA, passed away and went to her Savior and Lord and re-joined her family who went before her on Tuesday, July 14, 2020 at Lancaster General Hospital, after a brief illness. Born in Lancaster, PA, and a resident of Millersville for 60 years, she was the widow of Reah H. Thatcher who passed away in 2002. They were married for 58 years. She is the daughter of the late Paul O. and Nora Gerfin Freidly. Helen was a 70 year plus member of her beloved Lancaster Church of the Brethren and was the oldest living member. She held the former positions as a member of the choir, song leader for the primary classes and taught Sunday School classes when the church was located on Charlotte Street. She was the former President of the Kready Avenue Civic Association and worked to save the red maple trees which are still so beautiful. She enjoyed cooking, baking, writing poems, collecting plates, gardening and working in her flower beds, playing bingo and the organ and word search puzzles. She was requested to sing at many weddings and funerals and had a beautiful voice. She enjoyed traveling to Ocean City, MD, trips to the New England states during the fall, and visits to Wilson, NC. Most of all she loved her family, especially family visits, and the holiday gatherings, sacrificing time to cook while her family was together. She was the family prayer warrior and always kept those she loved in her heart. Helen worked for the former M.T. Garvin’s Department Store where she loved setting up the toy department at Christmas time. She also operated the elevator and worked in various areas in the store wherever she was needed. She is lovingly survived by her children, David H. Thatcher, Lancaster, PA, Michael D., husband of Marsha Craig Thatcher, Hilton Head, SC, Vicki A., wife of Richard Sprout, Ephrata, PA and daughter-in-law, Cheryl Thatcher, Lancaster, PA; nine grandchildren and many great-grandchildren. She was preceded in death by her son, Donald P. Thatcher in 2013, two brothers, Robert and William Freidly, and a sister, Ruth Freidly. A private graveside service will be held at Riverview Burial Park.

Helen P. Thatcher, 99, of Lancaster, PA, passed away and went to her Savior and Lord and re-joined her family who went before her on Tuesday, July 14, 2020 at Lancaster General Hospital, after a brief illness. Born in Lancaster, PA, and a resident... View Obituary & Service Information

The family of Helen P. Thatcher created this Life Tributes page to make it easy to share your memories.

Send flowers to the Thatcher family.