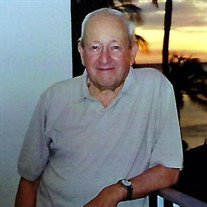 Herbert Oresky, 100, of Lancaster, PA, formerly of Brooklyn, NY, passed away at on Tuesday, February 8, 2022. He was a resident at Mennonite Home Communities, Lancaster, PA. He was the son of the late Barney and Lena (Becker) Oresky. He was married to his beloved wife, the late Joan (Posnack) Oresky for 53 years. Herbert graduated from Abraham Lincoln High School in 1941 and attended Casey Jones Aeronautical School in 1942. He served in the United States Army Air Corps from 1943 to 1945 as an Aerial Engineer in France and England, in the 440th Troop Carrier Group, 96th Squadron. His service earned him an American Service Medal, Good Conduct Medal, WWII Victory Medal, European–African–Middle Eastern Campaign Medal. After returning home, he earned his Bachelor of Science in 1948 and his Master of Art from New York University School of Education in 1951. He worked as an industrial arts teacher for West Hempstead Jr-Sr. High School in NY from 1954 to 1958, Herricks School District from 1958 to 1983, and he was also a certified driver training instructor. He was loved and respected by his colleagues and students. Herbert was a skilled carpenter, metal worker, model ship builder, and model railroader. He could build or fix anything. Herbert loved music and was a talented piano and organ player. He was well read, completing 4 to 5 books a month. Along with his wife, he enjoyed trips to Europe, Israel, Japan, and Thailand. He is survived by his daughter, Rhonda H. Kleiman, of Lancaster, PA, son, Mark S. Oresky, of Appleton, WI, nephew, Michael Horowitz, of Marlboro, NJ, and former son-in-law, Allan M. Kleiman, of Fords, NJ. A Graveside Service at Forest Green Park Cemetery, with Rabbi Jack Paskoff officiating, will be private. In lieu of flowers, memorial contributions may be made to Mennonite Home Benevolent Fund, Congregation Shaarai Shomayim, a fund of your choosing, or Hospice & Community Care, 685 Good Drive, P.O. Box 4125, Lancaster, PA 17604-4125.

Herbert Oresky, 100, of Lancaster, PA, formerly of Brooklyn, NY, passed away at on Tuesday, February 8, 2022. He was a resident at Mennonite Home Communities, Lancaster, PA. He was the son of the late Barney and Lena (Becker) Oresky. He was... View Obituary & Service Information

The family of Herbert Oresky created this Life Tributes page to make it easy to share your memories.

Send flowers to the Oresky family.