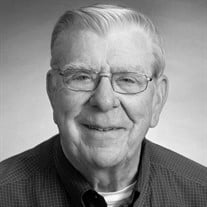 Howard J. Miller, Jr., 93, passed away on Thursday, October 7, 2021 after a lengthy illness, with his longtime companion, Carla, by his side. An Eagle Scout, born in Lock Haven, PA, Howard was the son of the late Howard J. and Isabel Winner Miller, the husband of the late Sally Woodward Miller who died in 2004, and the companion of Dr. Carla Rineer. A true Renaissance man, he lived a full and interesting life. Inspired by World War II, he served in the US Navy on the destroyer, USS Sarsfield, and was honorably discharged as a Chief Petty Officer, First Class. The GI Bill found him at Carnegie Mellon, where he graduated with a BFA in Drama. After graduation, he began his first of many careers. He acted in the Oregon Shakespeare Festival in Eugene, Oregon for two seasons, earning a standing ovation for his performance as Petruccio in The Taming of the Shrew. Soon thereafter, Howard went on to act in Summer Stock in Bermuda and on TV in NYC. He even did a bit of modeling there and can be seen on the covers of some romance magazines of the time. Never the most patient of men, he decided fame came too slowly, while the years passed too quickly. Howard got a position in sales and advertising at Armstrong World Industries, where he directed their many shows and conventions. Then, Howard met Sally. They married, had children, both of whom followed in his footsteps in marketing and advertising. After 10 years, Howard became ready for a new challenge, moved to Erie, PA, and did advertising for the Keystone Grape Cooperative. After a year or two, Howard and Sally returned to Lancaster County, where they settled into Wilderness Farm, outside of Strasburg. Howard established Wilderness Farm Shooting Preserve where more than 20,000 game birds were raised annually, many sold to numerous restaurants in Philadelphia and Washington, DC, including La Bec Fin. He also founded an advertising agency, Howard Miller Associates, where he served many clients all over the US, including Atlantic Richfield, ARCO Chemical, and Burlington Northern Railroad. Before and after retirement, he devoted his energies to his great love of wine. A guiding light in PA’s fledgling wine industry, Howard planted two vineyards in Lancaster County, cultivating French-American hybrid varieties, as well as traditional European species. Howard loved fine dining, wine and wine culture, and was an integral part of developing both the Pennsylvania game bird and wine industries. In his final years, he researched indigenous North American grape varieties. A great story-teller, he frequently recounted falling in love with the Fulton Theater as he toured the town before his Armstrong interview. In 1957, he acted upon that love by directing a production of Thornton Wilder’s Our Town with Victor Jorre, a friend from summer stock, as guest star. It was the first production in the revitalization of Lancaster’s Fulton Opera House upon its centennial anniversary. He also loved traveling. After Sally’s passing, he and Carla traveled extensively going to the country of Georgia, where grapevines were first domesticated; Turkey; Greece; Cyprus; Malta; Israel; England; France; and, of course, Italy. Howard’s hosting skills are legendary, as are his sense of humor, brilliance, kindness, and loving ways. He adapted easily to leadership roles and was a former president of the Pennsylvania Game Breeders Association and the Pennsylvania Grape Growers Association. He was a former member of the Hamilton Club, American Advertising Association, Lancaster Historical and Berks County Historical Societies. He will be dearly missed by his companion, Carla. He is survived by his son, Howard J. “John” Miller, III, (Louise Brenneman), Evanston, IL; his daughter, Sarah Drew Dorgan (Paul), Strasburg, PA; his brother, Forney Miller (Jane), Audubon, PA; six grandsons: William (Cait) Dorgan; Daniel (Allison) Dorgan; Stetson; Noah; John; Mose Miller; and one great-grandson, Everett William Dorgan; and his companion’s family, Tara (Andrew) Poag and granddaughter, Vivian Poag. Howard was also predeceased by his sister Marilyn Isabel (Richard) Faykosh. A celebration of Howard’s life will be held at The Groffs Family Funeral Home, 528 W. Orange Street, Lancaster, PA on Thursday, October 14, 2021 at 2:00 p.m. The family will receive friends from 1:00 p.m. until the time of service. Interment will be in Highland Cemetery in Lock Haven, PA at a later date. In lieu of flowers, memorial donations in Howard’s name may be made to Hospice & Community Care, 685 Good Drive, Lancaster, PA 17604-4125 and LancasterHistory, 230 N. President Avenue, Lancaster, PA 17603 or Lancasterhistory.org. Please visit Howard’s Memorial Page at www.TheGroffs.com

Howard J. Miller, Jr., 93, passed away on Thursday, October 7, 2021 after a lengthy illness, with his longtime companion, Carla, by his side. An Eagle Scout, born in Lock Haven, PA, Howard was the son of the late Howard J. and Isabel Winner... View Obituary & Service Information

The family of Howard J. Miller, Jr. created this Life Tributes page to make it easy to share your memories.

Send flowers to the Miller, family.