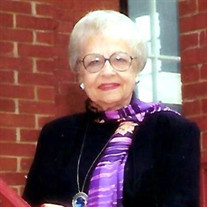 Dr. Iris (Stella) MacRae, 101, peacefully passed away on Thursday, March 4, 2021 at Brethren Village, Lititz, PA with her loving sons, Duncan, Gordon and Scott by her side. She was a virtual &#8220;trailblazer&#8221; for human issues and education... View Obituary & Service Information

The family of Dr. Iris (Stella) MacRae created this Life Tributes page to make it easy to share your memories.

Send flowers to the MacRae family.