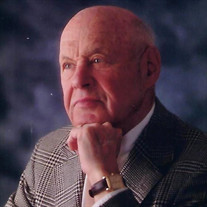 Irving Budd Callman, Jr., 99, passed away at Mennonite Home while under Hospice care on Tuesday, December 29, 2020. Born in Bronxville, NY, he was the son of the late Irving and Rita Spiro Callman, Sr. He was married to Connie Crum Callman for 23 years. He was previously married to the late Martha Hunt who passed away in 1994. Budd graduated from Williston Academy in 1940 and from Bowdoin College in 1944 where he was President of Zeta Psi Fraternity. He served in the Pacific theater with the United States Marine Corps as 1st Lieutenant from 1944-1945 and was honorably discharged in 1958 as Captain. Following his service to his country, he joined Armstrong Cork Company in 1947. He interrupted his employment with Armstrong in 1951 and, together with a friend, bought a WWII jeep and took ship for Lisbon, Portugal. From that point they traveled across Europe and the Middle East arriving in Baghdad. He returned in 1952, reinstated his employment with Armstrong, and met and married Martha Hunt. In 1954 he was transferred to Spain as Manager, South Spain for Armstrong’s Spanish subsidiary. From 1960-1970 he served as General Manager of the Spanish Company, and President of their Board of Directors from 1970-1972. In 1970, Armstrong transferred Budd to Dusseldorf Germany, as Assistant General Manager of their German Company and its European affiliates. In 1976 he returned to the Parent Company in Lancaster in International Operations, retiring in 1986 as Director, International & Subsidiary Compensation. An active community leader, he served as President of the Charlotte Street Association and President of the Board of Trustees of the Fulton Opera House where he was named Trustee Emeritus. He was also active with United Way and was a member of the Lancaster Country Club and Trinity Lutheran Church. When not engaged in actively working for these organizations, he was an avid golfer who enjoyed nothing more than meeting his friends on the golf course, even when the ground was too frozen to drive a golf tee. He and Connie traveled frequently to his beloved Spain, and extensively throughout Europe, England, the Scandinavian countries, Central America and the Galapagos Islands. His wanderlust never abated from the time of his Middle East journey! In addition to his wife, he is survived by a niece Nancy Henkes (Robert), a nephew Peter Thompson, great nephews Jeffrey Henkes (Adrienne) and Alex Henkes (Caren), as well as sisters-in-law, Ann Broich and Elizabeth Crum. He is also survived by nieces- and nephews-in-law Steven Broich, Sharon Morgan (Andrew), Michael Broich (Hannah), Mark Broich, (Kristin), Joy Weiler (Jason), and numerous great-great nieces and nephews. He was preceded in death by his sister, Marjorie Thompson and a very close 1st cousin whom he considered to be a brother, Charles Callman. This is a synopsis of what Budd accomplished in his life, but the measure of a man is far greater than what he does! As Mary Baker Eddy wrote in 1895, “The man of integrity is one who makes it his constant rule to follow the road of duty, according as Truth and the voice of his conscience point it out to him. He is not guided merely by affections which may sometime give the color of virtue to a loose and unstable character. The upright man is guided by a fixed Principle, which destines him to do nothing but what is honorable, and to abhor whatever is base or unworthy; hence we find him ever the same,-- at all times the trusted friend, the affectionate relative, the conscientious man of business, the pious worker, the public-spirited citizen. He assumes no borrowed appearance. He seeks no mask to cover him, for he acts no studied part; but he is indeed what he appears to be, -- full of truth, candor, and humanity. In all his pursuits, he knows no path but the fair, open, and direct one, and would much rather fail of success than attain it by reproachable means. He never shows us a smiling countenance while he meditates evil against us in his heart. We shall never find one part of his character at variance with another.” Due to the temporary limitations of COVID, the family will hold a private interment at Conestoga Memorial Park and will hold a larger celebration of Budd’s magnificent life later in the spring of 2021. A tribucast is available to be seen at https://client.tribucast.com/tcid/65982381 In lieu of flowers, memorial contributions can be made to The Fulton Theater, 12 N. Prince St., Lancaster, PA 17602.

Irving Budd Callman, Jr., 99, passed away at Mennonite Home while under Hospice care on Tuesday, December 29, 2020. Born in Bronxville, NY, he was the son of the late Irving and Rita Spiro Callman, Sr. He was married to Connie Crum Callman for... View Obituary & Service Information

The family of Irving Budd Callman Jr. created this Life Tributes page to make it easy to share your memories.

Irving Budd Callman, Jr., 99, passed away at Mennonite Home while...

Send flowers to the Callman family.