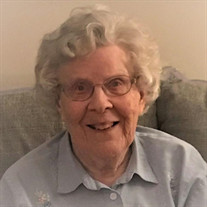 Isabel Meloy Gehr died on July 21, 2021 in Lancaster, Pennsylvania at the age of 104. She was born on August 6, 1916 in Washington, Pennsylvania to Robert Harry and Alice (Lambie) Meloy. She had three younger brothers, one younger sister, and two older half-sisters. Isabel graduated from Westminster College with a Bachelor's Degree in English in 1938. While at Westminster she met Adam Gehr. They were married on August 24, 1940. After their marriage Isabel and Adam lived in Pittsburgh and later moved to Adam’s father’s farm near Greensburg, Pennsylvania to help during the war. There she learned to be a farm housewife and even helped in the fields driving the tractor! After two years on the farm and a short stay in Indiana, Pennsylvania they moved to Columbus, Ohio where they lived for 15 years. Making a comfortable home for her husband and family was her focus. Isabel made clothes for her three daughters, served as a Campfire leader for her daughter Jane’s troop, and, with Adam, was an enthusiastic square dancer. She enjoyed writing, especially poetry. Adam’s career took the family to Denver in 1963 and two years later to Lancaster, PA. There they joined Highland Presbyterian Church where Isabel served as a Stephen minister and was active in other church groups. From 1975 through 1979 Adam worked in Belgium. Isabel took advantage of their stay to improve her French and to travel extensively. After returning to Lancaster, Adam retired in 1981 and they resumed travelling to Asia, Africa, and Latin America. In 1994 they moved to Homestead Village in Lancaster where they lived the rest of their lives. Adam died in 2019. Isabel is survived by her children: Adam (Virginia Miller), Martha Wolfe (Donald), Jane Hammoud (Salah-Dine), and Sara Dickey (Roger); eight grandchildren, and seven great-grandchildren. She was pre-deceased by her daughter-in-law, Anita Gehr. A Memorial Service will be held Monday, September 13, 2021, eleven o’clock a.m. at Highland Presbyterian Church, 500 E. Roseville Road, Lancaster, PA 17601. Donations in her memory may be sent to Samaritan Counseling Center, 1803 Oregon Pike, Lancaster, PA 17601 or TLC Homeless services, 105 E. King St. Lancaster, PA 17602, attn Roger Steffy.

Isabel Meloy Gehr died on July 21, 2021 in Lancaster, Pennsylvania at the age of 104. She was born on August 6, 1916 in Washington, Pennsylvania to Robert Harry and Alice (Lambie) Meloy. She had three younger brothers, one younger sister, and... View Obituary & Service Information

The family of Isabel Meloy Gehr created this Life Tributes page to make it easy to share your memories.

Send flowers to the Gehr family.