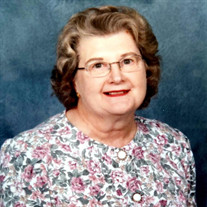 Jacqueline Joslin Sellers, 85, passed away at Moravian Manor in Lititz, PA on Thursday, February 18, 2021. She was formerly of 1847 Northbrook Drive in Lancaster, where she lived for 34 years. She was the loving wife of John Kresge Sellers (Jack) for 65 years, with whom she loved to dance, travel, socialize, and laugh. Jackie was born in Camden, NJ, the only child of Pauline Eberding Joslin and Everett Sheppard Joslin. After graduating from Woodrow Wilson High School, where she met Jack, she attended Peirce Junior College in Philadelphia and Trenton State College in Trenton, NJ. After a brief career as a secretary for the Campbell Soup Company in her hometown of Camden, she fulfilled her dream as a stay-at-home parent and volunteer. She was the most loving mom to her six children, having four sons: John K. Sellers, Jr. (Rhonda) of Lancaster, Steven J. Sellers (Anita) of Avondale, Mark A. Sellers (Tara) of Lancaster, Paul D. Sellers of Florida, and two daughters: Marilee Sellers Pazicky (Luke) of Maryland, and Kathianne Sellers Williams (Brian) of Texas. She adored her nine grandchildren: John T. Sellers (Rachel); Joslin, Andrew, and Thomas Sellers; Ashlynd and Carter Sellers; Maximilian and Alexandra Pazicky; and Abeni Williams. She was also blessed with a great-granddaughter, Elsie Grace Sellers. She was an active member of Saint James Episcopal Church for many years, where she had served on the vestry and was president of the ECW (Episcopal Church Women). At St. James she also served as chairman of the dining room for Towne Fair, was a member of the Steeple People, Planned Giving Committee, a Lay Eucharistic Visitor, Marriage Preparation Presenter, and ambassador to the Water Street Rescue Mission. In addition to her church, she was active in the community. She was past president and treasurer of The Towne Club of Lancaster, secretary of the Manheim Township Women’s Club, president, secretary, and treasurer for the Caper Club, and a member of the Iris Club. She also served on the board of the Manheim Township Superintendent’s Lay Advisory Council, was a member of the Occupational Development Auxiliary, and the Northbrook Hills Bible Study. Family, faith, and friends were important to her. Jackie loved traveling in the U.S. and abroad, reading, growing African violets, and playing bridge. She was a wonderful cheerleader for her children in their wrestling and running adventures. She was loved by many and will be dearly missed. A memorial service will be held at a later date because of the pandemic. In lieu of flowers, memorial contributions may be made in Jacqueline’s honor to the charity of your choice.

Jacqueline Joslin Sellers, 85, passed away at Moravian Manor in Lititz, PA on Thursday, February 18, 2021. She was formerly of 1847 Northbrook Drive in Lancaster, where she lived for 34 years. She was the loving wife of John Kresge Sellers... View Obituary & Service Information

The family of Jacqueline Joslin Sellers created this Life Tributes page to make it easy to share your memories.