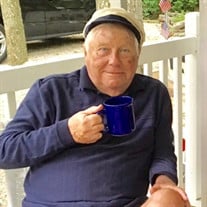 James Allen Munro, 83, passed away on Wednesday, April 21, 2021. He was born in Lancaster, Pennsylvania on November 5, 1937, the third son of Kenneth and Edythe Munro. “Jim” went to many schools in both Maryland and Pennsylvania. While living in New Holland and in the eighth grade, he was given the American Legion School Award which honored students who had inspired and encouraged their peers to strive to be better citizens. Jim graduated in 1956 from Lampeter Strasburg High School. While playing on their basketball team, his coach asked him to help organize a varsity club for the high school. He graduated on a Friday and began a long career with Armstrong the following Monday. He worked as a lab technician, photographer, and later in his career, he became a freight claims manager for Armstrong World Industries. After retiring, Jim began acting in several theatre groups including the Fulton, Ephrata Playhouse in the Park, Maranatha Productions, Lampeter Church of the Brethren Plays, Downingtown Dinner Theater, and Freedom Chapel Dinner Theatre. In the latter, he wrote and directed plays which were presented in Canada and the American Civic Association in India. Jim enjoyed camping and sailing on the Chesapeake Bay. Jim is survived by his wife, Sandie whom he married in 1962, sons Jamie and Jeffrey Munro (Christy), grandsons Justin and Jordan Munro, granddaughter, Jaden Munro - all of whom he loved and adored! He is also survived by his brothers, Kenneth and Ronald (Barbara) Munro. A private graveside service with be held at Mellinger Mennonite Cemetery for the family. In lieu of flowers, please consider making donations to The Promised Land Camp- a non-profit Jim regularly supported.

James Allen Munro, 83, passed away on Wednesday, April 21, 2021. He was born in Lancaster, Pennsylvania on November 5, 1937, the third son of Kenneth and Edythe Munro. &#8220;Jim&#8221; went to many schools in both Maryland and Pennsylvania.... View Obituary & Service Information

The family of James Allen Munro created this Life Tributes page to make it easy to share your memories.

Send flowers to the Munro family.