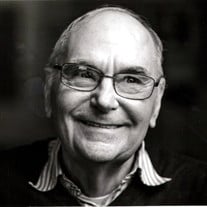 James N. Spencer, 79, died at The Glen at Willow Valley Communities on Saturday, March 20, 2021 with his wife, “Kat” holding his hand. He had suffered from Alzheimer’s disease for over 7 years. Born in Rainelle, WV, he was the son of the late Harold Lester Spencer, Sr. and the late Thelma Kessler Spencer. He grew up in rural West Virginia, where his proudest moment was quarterbacking the state-championship high school football team—a squad so small it couldn’t muster a scrimmage. He earned a B.S. in chemistry from Marshall University and a Ph.D. from Iowa State. He served on the faculty at Lebanon Valley College for 13 years before moving to Franklin & Marshall College, in Lancaster, PA, where he taught from 1980 until 2007 and was awarded the highest honors that the college bestows in both teaching and research. Jim was a key force in the early development of a teaching methodology that deemphasized the lecture and, as a result, most students remain awake. Called POGIL (process-oriented guided inquiry learning) it is now a 501 C-3 organization dedicated to improving teaching and learning. It is an approach designed to improve content mastery while also helping students to develop life and learning skills. Jim was also a generous mentor to generations of undergraduate research students and to faculty colleagues across the country. His research led to more than 100 publications, the vast majority with undergraduate co-authors. He was one of only a handful of chemists to receive more than one national award from the American Chemical Society (ACS), earning the 1999 Award for Research at an Undergraduate Institution and the 2005 George C. Pimentel Award in Chemical Education for his work in reforming the college chemistry curriculum. He was an ACS Fellow and, in 2015, along with two colleagues, earned the James Flack Norris Award for Outstanding Achievement in the Teaching of Chemistry. Jim's students described their interactions with him as a perfect mixture of mentoring and partnership, and also as very productive and enlightening experiences. His colleagues uniformly marveled at his passionate commitment to teaching, learning, and research, which he saw as inextricably intertwined. Before the onset of Alzheimer’s disease, he could, among other feats, quote from memory hundreds of lines of Shakespeare. He read voraciously in American history and collected, within the constraints of a professor’s salary, 17th and 18th-century English and American furniture and decorative arts. His collection of English apothecary jars resides at the Yale University Center for British Art. He was an avid fan of Penn State football and of the Philadelphia Eagles. He is survived by his wife of 37 years, Kathleen, a nephew, John Spencer (Fairmont, WV), sister-in-law, Mary Eleanor Spencer (Lutz, FL), sister-and brother-in-law, Patricia and Michael Hall (West Chester, PA), nephew, Matthew Hall, his wife Caryl and children Martha and Edward, (Carlsbad, CA), and niece, Catherine Hall (Media, PA). He was also blessed with the friendship of Scott and Giovanna Lerner (Lancaster, PA) and their two children, Miriam and Daniele. Kat wishes to express her heartfelt thanks to the team members on the second floor of the Glen for their devoted, loving, and professional care of Jim for almost 4 years. A Rite of Holy Burial will be held on Saturday, May 15, 2021 at 10:30 a.m. St. James Episcopal Church, 119 N. Duke Street, Lancaster, PA 17602. The visitation will begin at 9:30 a.m. Masks are required. A recording of the funeral service will be available later Saturday afternoon, please visit https://client.tribucast.com/tcid/2403736103 In lieu of flowers, memorial contributions may be made to The POGIL Project, P.O. Box 3003, Lancaster, PA 17604-3003 and/or Mathias J. Brunner Nursing Education Fund, Willow Valley Communities, 1000 Willow Valley Lakes Drive, Willow Street, PA 17584.

The family of James N. Spencer created this Life Tributes page to make it easy to share your memories.

Send flowers to the Spencer family.