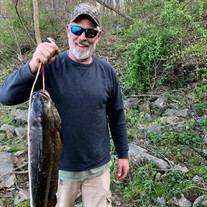 James “Guy” Trauger, 52, of Conestoga, PA, passed away on Tuesday, September 21, 2021. Born in Lancaster, he was the son of Mike Trauger, Sr. and Donna Barr, and his stepfather, Ron Barr, Sr. He was married to his beloved wife, Kim Trauger for 23 years. Guy attended Lampeter Strasburg High School and went on to work in construction. He was a jack-of-all-trades. He was a true outdoorsman, and enjoyed fishing, hiking, camping, kayaking, and hunting. He was a member of the Solanco Pool League and the Lancaster Archery Club. He was an avid sports fan; his favorite team was the Buffalo Bills. Guy loved his four cats, drinking black coffee, and spending time with his friends and family. He could make a friend out of anyone he spoke with. His daughters were his pride and joy. Guy was a wonderful father, husband, son, brother, uncle, and friend, and was an all-around wonderful person. In addition to his wife and parents, Guy is lovingly survived by his daughters, Erika Trauger (Zane), and Jess Trauger (DJ) of Conestoga, PA, his brothers, Doug Trauger (Kate) of Pequea, PA, and Ron “Buzz” Barr, Jr. (Kim) of Willow Street, PA, and his nieces, Amanda, Ally, and June. He was preceded in death by his father, Mike Trauger, Sr. and oldest brother, Mike Trauger, Jr. A Funeral Service will be held on Saturday, October 2, 2021 at 11:00 a.m. at The Groffs Family Funeral Home, 528 W. Orange Street, Lancaster, PA 17603. Visitation will be from 10:00 a.m. until the time of service. In lieu of flowers, Memorial Contributions may be made in Guy’s name to the American Heart Association.

The family of James "Guy" Trauger created this Life Tributes page to make it easy to share your memories.

Send flowers to the Trauger family.