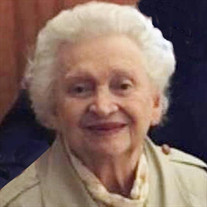 Janet Barber Godfrey Alspach, 101, of Lancaster, PA, died at Homestead Village on Tuesday, November 10, 2020. She was the daughter of the late George Pierce and Rae Walters Barber. She was married to the late Thomas Finley Godfrey II who died in 1985 and the late Alfred C. Alspach who died in 2002. Born in Palmyra, NJ, she graduated from the Palmyra High School in Palmyra, NJ and the Pierce School in Philadelphia, PA. During the War, she worked as a secretary for the Campbell Soup Company. She later became a staff writer and journalist with the Sunday News at the Lancaster Newspapers. Along with her husband Thomas, she was instrumental in helping to establish the Godfrey (Advertising) Agency (now Godfrey) here in 1947. Janet was a member of First Presbyterian Church and served on the boards of the Linden Hall School for Girls, Pennsylvania Academy of Music, Lancaster Red Cross, Lancaster General Hospital and several others. She was a former member of The Lancaster Country Club and The Hamilton Club. She served as a volunteer at LGH, stepping down at age 90, also at the Red Cross. She was active in many auxiliaries and civic fund-raising activities. She is survived by her son, Thomas F. Godfrey III, MD (Kathleen), Lancaster, and her daughter, Gretchen Godfrey, Palm Springs, CA and Denver, CO, step-daughter Frances Wenner (Fred), Frederick, MD, stepsons: David Alspach (Robyn), James Alspach, Alfred C. “Ted” Alspach (Mary), and George Alspach, all of Lancaster, also three grandsons: Brian Godfrey, and Calvin Godfrey (Nhan), both of Los Angeles, CA and Samuel Godfrey, Berkeley CA and 16 step-grandchildren. She was preceded in death by her sister, Doris Parr. Earlier this year she was a survivor of the corona virus pandemic at age 101. A Memorial Service is to be held at a later date will be announced. A Private Family Interment will occur at the Memorial Garden at First Presbyterian Church. In lieu of flowers, contributions in Janet’s memory may be sent to Lancaster General Health Foundation, Women and Babies’ Hospital, 2115 Harrisburg Pike, Suite 205, Lancaster, PA 17601, or Linden Hall School for Girls, Alumni Association, 212 West Main Street, Lititz, PA 17543.

Janet Barber Godfrey Alspach, 101, of Lancaster, PA, died at Homestead Village on Tuesday, November 10, 2020. She was the daughter of the late George Pierce and Rae Walters Barber. She was married to the late Thomas Finley Godfrey II who died... View Obituary & Service Information

The family of Janet Barber Godfrey Alspach created this Life Tributes page to make it easy to share your memories.

Send flowers to the Alspach family.