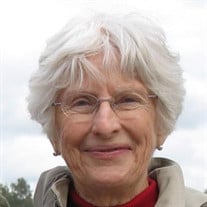 Janet Elinor Myers Keyser, age 91, died on January 17, 2022, surrounded by her loving family and able caregivers at the Moravian Manor in Lititz, PA. Janet was born in 1930 in York, Nebraska, the third child of Charles Edward (“C.E.”) Myers and Thelma Lorraine Harper Myers. Janet’s early life was marked by the death of her mother shortly after she was born. Together with her older brothers Jack and Thomas, she was raised on the family farm by her father with the help of relatives until C.E. Myers remarried in 1937 to Clare Von Bergen. Janet graduated from York High School in 1948 and was a valedictorian. She briefly attended the University of Nebraska until an academic scholarship led her east to Mount Holyoke College in South Hadley, Massachusetts where she received a B.A. in English in 1953. During summers throughout her college years, Janet worked as a waitress at the Log House in North River, New York, in the Adirondack Mountains, forming lifelong friendships there as well as at college. After graduating from Mount Holyoke, Janet taught elementary school in Hastings and Grand Island Nebraska. In 1952, Janet met her future husband Jack Keyser behind Hager’s Department Store while visiting Lancaster, Pennsylvania, the home of her college roommate. Janet and Jack maintained a long-distance relationship for several years and were married in January 1956 upon Janet’s return from teaching English in Cali, Colombia and Jack’s discharge from the US. Air Force. Throughout her 66 years of married life, Janet shared a love of travel with Jack. This included a two-month bicycle tour of the British Isles in 1957, two years spent in Manila, the Philippines during Jack’s stint with the Peace Corps in the late 1960s, and four years in Ibadan, Nigeria as an editorial consultant to the International Institute for Tropical Agriculture and later to several international research centers of the CGIAR (Consultative Group on International Agricultural Research) during the 1980s. Janet also co-created and edited the Penn-Dutch Traveler, a tourist newspaper distributed in Lancaster County Pennsylvania. She also worked as an editor in the Farmers Home Administration in Washington, DC. between 1978-80 and in the Research Department of the National Education Association from 1989 until her retirement in 1997. During her professional life and as a retiree, at home and abroad, Janet built many friendships maintained over the years through reunions, Christmas card updates and her outstanding hospitality. An avid Democrat, she volunteered at the polls. A religious woman and lifelong Episcopalian, she was a member of St. James Episcopal Church, Lancaster where she volunteered by serving breakfast to those in need, led noonday prayers and served on the Church’s communications committee. She exemplified her love of education through her work with the Lancaster Early Education Center, where she served on their board. She was also a charter member of her local chapter, AK/PA of P.E.O. International, an organization that champions women and their education. Janet acted on issues that she strongly felt needed to be addressed. She helped form a committee that went before the Manheim Township School Board to establish a way for parents to have input into the disciplinary actions of school employees. She also helped raise the issue of the need for a paper trail for all elections when computer technology was first being introduced into the election process. Janet loved reading fiction, birdwatching and the opera. Janet was preceded in death by her brothers, Jack L. Myers and Thomas E. Myers and her sisters-in-law, Betty J. Myers and Margaret M. Keyser. A devoted wife and mother, Janet is survived by her husband, Jack E. Keyser, daughter, Jane Girondo (Gene), son, Edward Keyser, grandchildren, Peter Girondo, Carolyn Girondo and Johanna Keyser. She is also survived by her brother-in-law, Reverend E. Edward Keyser and sister-in-law, Patricia Myers. A Requiem Mass will be held on Saturday, April 9, 2022, at 2:00 p.m. at St. James Episcopal Church, 119 N. Duke Street, Lancaster, PA 17602.To view the service live, please click the link. https://www.saintjameslancaster.org/funeral-service/ Interment will be private. If you would like to make a donation in memory of Janet, please consider the Program for Continuing Education Project of P.E.O. International at P.E.O. Executive Office, Treasurer's Office, 3700 Grand Avenue, Des Moines, IA 50312 https://donations.peointernational.org/ or St. James Episcopal Church, 119 N. Duke Street, Lancaster, PA 17602.

The family of Janet Elinor Keyser created this Life Tributes page to make it easy to share your memories.

Send flowers to the Keyser family.