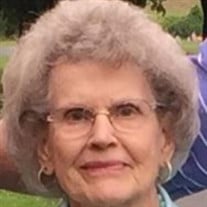 Janice Mahaffey, 92, of Lancaster PA, died on Monday, October 18, 2021 after a battle with cancer. She was the wife of the late Bruce (Lester) Mahaffey who died in 2000. Born in 1929 in Jenkinjones, West Virginia, she was very proud to be “a coal miner’s daughter.” She, her husband, and oldest son moved to Lancaster in 1953 in order for her husband to get out of working for the coal mines. Her husband went to work at the Armstrong Flooring plant in Lancaster until his retirement. She was the daughter of the late Frank Sluss and Ara Walk. In addition to her parents, she was preceded in death by her sister, Edith Beavers, and her brothers, Earl Sluss, Kenneth Sluss, Frank Sluss, Clifford Sluss, and Randy Sluss. She has two surviving sisters, Naomi Murry and Gracie McGee. She will be greatly missed by her two children, Bruce Mahaffey Jr. married to Janet of Lancaster, and Steve Mahaffey married to Gayle of Columbia. She will also be missed by her five grandchildren, Ryan Mahaffey of Bethel Park PA, Amanda Valentin of Lititz, PA, Keith Mahaffey of Palmyra PA, Connor Mahaffey of Haverford, PA, and Shelia Mahaffey of Columbia, PA, and her five great-grandchildren: Teddy Mahaffey, Aidan Mahaffey, Tyler Mahaffey, Grayson Mahaffey and Scarlett Mahaffey. Janice was a homemaker her entire life. Although she kept pretty much to herself, she was a warm and kind person. She dearly loved her entire family and would do anything for them. She enjoyed making southern biscuits and gravy and having members of her family and their friends over for breakfast. She received a laptop computer as a gift in her 80’s and used it for her email, Facebook, and to play Trivial Pursuit and Words With Friends with her family and friends. She also greatly enjoyed doing crossword puzzles and watching the Game Show Network and her favorite TV show Jeopardy. In lieu of flowers please send a donation to the American Cancer Society, 314 Good Drive, Lancaster, PA 17603. There will be a private graveside service for just her family.

The family of Janice Mahaffey created this Life Tributes page to make it easy to share your memories.

Send flowers to the Mahaffey family.