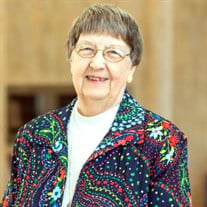 Joan Brown Nicholson, 86, of Mennonite Home Communities, went home to the Lord on Monday, August 31, 2020. Born in Abington, PA, she was the daughter of the late George and Ann Orr Brown. She was married to the late Reverend Robert E. Nicholson, with whom she shared 57 years of marriage. After graduating from Upper Darby High School in 1952, Joan began her career as Secretary to the Registrar of the School of Nursing of the University of Pennsylvania Hospital. Within two years she was promoted to Secretary to the Director of the School of Nursing, remaining employed until March 1958 when she married Bob. After raising their 3 children, she resumed her career in 1974 in the Classified Advertising Department of The Suburban and Wayne Times. In 1976, she was promoted to Manager of the department, where she remained until 1993. In 1994, Joan and her husband Bob were employed by Kirby Smith of Lancaster, as professional fund raisers. They traveled the United States raising money for Christian Churches and schools until retirement in 1998. Joan and her husband moved to Woodcrest Villa Retirement Community in 2005 where she served on many committees including Resident Council, of which she was President for 4 years. In 2010, Joan was appointed as the resident member of the Board of Directors of Mennonite Home Communities where she served until 2016. Joan was a long-time member of The United Methodist Church and served on several District Committees including six years on the Lancaster District Committee for Ordained Ministers. Joan is survived by three children, Peter (Laurel Penny) Nicholson, Pamela (Michael) Benton, Karen (Steven) Miner, six grandchildren, Kristina (Steven) Dousharm, Philip Nicholson, Ryan (Kelly Schultz) Benton, Meredith (Jed) Bulgrien, Megan (Ernest) Puig, Ben (Lindsay McCary) Miner, eight great-grandchildren, Sam, Annabelle, Jackson, Jake, Carter, Reed, Clara, Ephram and Melissa Alessi Nicholson, the wife of her late grandson, Brad. Joan is also survived by her sister, Gail Montgomery. She was predeceased by her sister, Judith Petruskevich in 2013, her husband, Robert Nicholson in 2016 and her grandson, Bradley Nicholson in 2020. Funeral services will be private due to COVID-19 restrictions. Interment will be at Boehm’s United Methodist Church Cemetery in Willow Street. Please feel free to watch Joan's service by clicking on the link https://client.tribucast.com/tcid/15899896 Memorial contributions may be made to: Benevolent Care Fund, Mennonite Home Communities, 2001 Harrisburg Pike, Lancaster, PA 17601.

Joan Brown Nicholson, 86, of Mennonite Home Communities, went home to the Lord on Monday, August 31, 2020. Born in Abington, PA, she was the daughter of the late George and Ann Orr Brown. She was married to the late Reverend Robert E. Nicholson,... View Obituary & Service Information

The family of Joan Brown Nicholson created this Life Tributes page to make it easy to share your memories.

Send flowers to the Nicholson family.