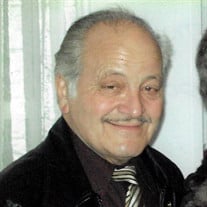 It is with great sadness that we announce the peaceful passing of our beloved father, John M. De Angelis on Wednesday, February 9, 2022. John was born in Lancaster, PA, the son of the late Stanislao A. De Angelis and Maria P. (Nervegna) De Angelis. Dad was often misunderstood due to his gruff demeanor, but beneath that exterior was a caring heart. He was always willing to help someone in need, championed the underdog, and was fiercely loyal to his family and friends. A true do-it-yourselfer, John enjoyed fishing, camping, and tinkering with cars or various things around house, but his greatest joy was being with his family. He was active in his grandchildren’s lives, never missing a school event and always proud of their accomplishments. John cared about all living creatures, especially finding comfort and companionship with his pet cats Tiger and Claude. During his later years, John enjoyed sitting outside watching the birds and rabbits frolic in his yard and conversing with neighbors. He never passed up a good meal with family and regularly met acquaintances for a morning cup of coffee at local restaurants. John served the Lancaster County community as a mailman for 45 years. During his career with the US Postal Service, he was honored to earn the Million Mile Club Safe Driver Award. He also proudly served his country in the US Army, during which time he traveled extensively across the United States. He enjoyed recalling stories of those journeys for those around him. John continued his service in the Army Reserves until retirement in the 1990s. The family would like to thank the staff at Oak Leaf Manor North for their kind and committed care in his final months and express their gratitude for the friends he met there, including Jose, Dot, and Joseph. John is survived by his two children, Maria C. De Angelis (whose life partner, Orlando “Gill” Timmonds, was like a second son to him) and Nicholas J. De Angelis, both of Lancaster; his two grandchildren; and his four great-grandchildren, Maizi, Javion, A’mora, and Ziyon. Also surviving him are his nephew, Rick Madonna of Chambersburg, PA, and his former spouse, Linda L. De Angelis. He was preceded in death by his siblings, Angelo De Angelis and Anita Madonna. A Memorial Service will be held on Saturday, February 19, 2022, at 11:00 a.m. at The Groffs Family Funeral Home, 528 W. Orange Street, Lancaster, PA 17603. Masks are required. Friends are welcome to greet the family at 10:00 a.m. Interment will be private at St. Anthony’s Cemetery. In lieu of flowers, please donate to The Humane League of Lancaster County, 2195 Lincoln Hwy East, Lancaster, PA 17602 and/or The Salvation Army 1244 Manheim Pike, Lancaster, PA 17601.

It is with great sadness that we announce the peaceful passing of our beloved father, John M. De Angelis on Wednesday, February 9, 2022. John was born in Lancaster, PA, the son of the late Stanislao A. De Angelis and Maria P. (Nervegna) De Angelis.... View Obituary & Service Information

The family of John M. De Angelis created this Life Tributes page to make it easy to share your memories.

It is with great sadness that we announce the peaceful passing...