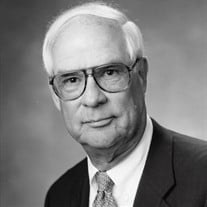 John F. Garber, Jr., 94, of both Lancaster, PA, and Naples, FL, passed on Monday, December 2, 2019 surrounded by his family at the Willow Valley Community, Willow Street, PA. Born in Lancaster July 10, 1925, he was the son of the late J. Ferry Garber and the late Bernice Virginia Harding Garber of Lancaster. During John’s 54-year marriage to Barbara Stark Garber they had two sons who survive him: David Stark Garber, husband of Cynthia Sayre Gilbert, of Manheim, PA, and James Robert Garber, husband of Deborah Chappell Garber, of Kennett Square, PA. In addition to his sons, John is survived by granddaughters Julie Ann (Bryan) Smith of Huntingdon, PA, Jessica Lynn (Josh) Dickhaus of Mainesville, OH, five great-grandchildren, and his niece, Bernice (Bunny) E. Blair Herr Passe, of Ft. Myers, FL. He was predeceased by his sister, Bernice Eloise Garber Graybill of Lancaster. After Barbara Stark Garber’s death in 2003, John married Barbara D. Betts in 2007 who passed August 30, 2019. John is also survived by his stepchildren Christine B. Olsen of Richland, WA; Lori B. Sturgess, of Lancaster, PA; William E. Betts III, of Denver, CO; and Tracy B. Martinez of Washington, D.C. John went to public school in Ephrata and to Franklin & Marshall Academy. He graduated from The Lawrenceville School in 1944 and graduated cum laude from Princeton University in 1948 with a degree in economics. In 1890 John’s grandfather, Eli L. Garber, pedaled his bicycle to Stevens, Lancaster County, PA to invest his personal savings in a small creamery operation. Over the next 100 years that small creamery company grew from delivering milk and dairy products to homes by horse and wagon, to also delivering to supermarkets and independent grocery stores with the latest in refrigerated transportation. The company incorporated in 1929 as Penn Dairies, Inc., and adopted the trade name Pensupreme for its products. Following the death of Eli Garber in 1951, John’s father, J. Ferry Garber, became president of the company. John joined the company in 1948 and learned the dairy business by working in various jobs in farm inspection, production, distribution, warehousing, sales, finance and administration. He was elected director of Penn Dairies in 1950, treasurer in 1957 and, following the footsteps of his father, president of the firm later that year. He was elected chairman of the board in 1982. To accommodate the expanding business and later addition of private label manufacturing for major companies, in 1965 John consolidated four milk processing plants, the ice cream manufacturing plant and multiple distribution centers into one facility—one of the most modern dairy processing companies in the eastern United States--on Hempstead Road in Lancaster, Pennsylvania. From here the company marketed and distributed fluid milk, ice cream and dairy-related products to a wide geographic area, primarily in the Middle Atlantic States. Processing and distribution of bulk milk and specialty cream products continued at a plant in York, Pennsylvania. Over the years, the company developed, owned and operated a chain of 75 Pensupreme convenience and dairy stores and a number of Pensupreme Shoppes serving food and ice cream. One of the first ice cream shoppes was a roof garden atop the first Woolworth store ever built, located in downtown Lancaster. John retired in 1990 when the company was sold to Crowley Foods of Binghamton, New York. During the time he led the company’s growth, John was active in community affairs. He served on various committees and offices of United Way from 1954 to 1963; St. Joseph Hospital Advisory Board of Directors from 1958-1970; Citizen’s Development Committee Cabinet of Lancaster and 1962 Advisory Cabinet to the Mayor, City of Lancaster; Citizens for Lancaster County Highway Improvement; and as a director and president of the Manufacturers’ Association of Lancaster, and a director of the Lancaster Chamber of Commerce, Lancaster County Industrial Development Bureau, and Lancaster Chamber of Commerce and Industry. He was a director of the Fulton Bank and Fulton Financial Corporation of Lancaster PA from 1957 to 1996 and was a Trustee of Linden Hall School for Girls, Lititz, PA from 1959 to 1979. An accomplished pilot holding private pilot, multi-engine, and instrument ratings, he was a member of the Quiet Birdmen and the Lancaster Aero Club. He also served on the Lancaster Airport Promotional Advisory Committee and the Lancaster Airport Authority. His summer job as photographer for the Lancaster Newspapers while in college led to a life-long interest in photography. In honor of his accomplishments in business and the community, John was awarded the Lancaster Junior Chamber of Commerce annual Distinguished Service Award as “Outstanding Young Man of 1960 in Lancaster County.” He served the dairy industry as a director and president of the Northeast ice Cream Manufacturers Association and the International Association of Ice Cream Manufacturers and was a director of the Milk Industry Foundation. He was a member of Lodge No. 43, F&AM, the Lancaster Lodge of Perfection, Harrisburg Consistory, Zembo Temple, and the Rotary Club of Lancaster. He was also a member of the Lancaster Pirates, a member of the Lancaster Country Club and the Pelican Bay Club of Naples, FL, and a member, director and president of the Hamilton Club of Lancaster. An avid golfer and tennis player, John was a member of the Court Jesters of the Lancaster Country Club. A lifelong member of Lititz Moravian Congregation, Lititz, Pennsylvania, he was also an associate member of the United Church of Christ, Naples, FL. Relatives and friends are invited to John’s Funeral Service on Thursday, December 12, 2019 at Lititz Moravian Church, 8 Church Square, Lititz, PA 17543 at 10:30 a.m. with Reverend Dean R. Jurgen officiating. The family will receive friends from 9:30 a.m. until the time of service. In lieu of flowers, memorials may be sent in John’s memory to Lititz Moravian Church, 8 Church Square, Lititz, PA 17543.

John F. Garber, Jr., 94, of both Lancaster, PA, and Naples, FL, passed on Monday, December 2, 2019 surrounded by his family at the Willow Valley Community, Willow Street, PA. Born in Lancaster July 10, 1925, he was the son of the late J. Ferry... View Obituary & Service Information

The family of John F. Garber, Jr. created this Life Tributes page to make it easy to share your memories.

Send flowers to the Garber, family.