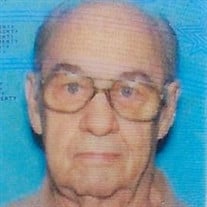 John Elwood “Woody” Johnson, Jr., 83, of Lancaster, PA, passed away on Friday, May 6, 2022. He was the son of the late John Elwood Johnson, Sr. and Daisy (Minder) Johnson. Woody graduated from J.P. McCaskey High School. He proudly served in the United States Army from 1961 to 1963. He worked as a computer analyst for Sperry New Holland until retirement, and part time doing mechanical work for Park Place Automotive. Woody loved hunting and taking trips to his cabin in Mifflin County. He was a member of the National Rifle Association and was an avid gun collector. He enjoyed spending time with his family, and adored his great-grandson, Jaxon. He is survived by his son, Michael A. Johnson (Melanie) of Whitmer, PA, daughter, Julie A. Hoar, of Manheim, PA, grandchildren, Teal Johnson, Cree Johnson, Tyler Turner, David Stoner (Jessica), great-grandson, Jaxon Stoner, sister, Doris Work (James), brothers, David Johnson, and Paul Johnson. He was preceded in death by his brother, Billy Johnson. Family and friends are invited to Woody’s Funeral Service on Friday, May 13, 2022, at 2:00PM at The Groffs Family Funeral Home, 528 W. Orange Street, Lancaster, PA 17603. A viewing will be held from 1:00PM until the time of service.

The family of John Elwood "Woody" Johnson, Jr. created this Life Tributes page to make it easy to share your memories.

Send flowers to the Johnson, family.